The county was formed on March 13, 1844, from portions of Gloucester County. The county was named for Charles Pratt, 1st Earl Camden, a British judge, civil libertarian, and defender of the American cause. Camden County is part of the Camden, NJ Metropolitan Division of the Philadelphia-Camden-Wilmington, PA-NJ-DE-MD / Delaware Valley Metropolitan Statistical Area.

Located in a coastal / alluvial plain, the county is uniformly flat and low-lying. The highest points are a survey benchmark near the Burlington County line at 219 feet (67 m) above sea level. The low point is sea level, along the Delaware River.

The county borders the following counties:

Camden County has 37 municipalities of diverse sizes and populations. Nine are less than one square mile in area, and five have fewer than 2,000 residents (excluding Tavistock and Pine Valley which are golf courses with nominal populations). Over half of county residents live in five municipalities having populations over 30,000 (Camden, Cherry Hill, Gloucester Township, Winslow, Pennsauken).

There were 190,980 households out of which 31.1% had children under the age of 18 living with them, 46.3% were married couples living together, 16.4% had a female householder with no husband present, and 32% were non-families. 26.3% of all households were made up of individuals, and 10% had someone living alone who was 65 years of age or older. The average household size was 2.65 and the average family size was 3.22. 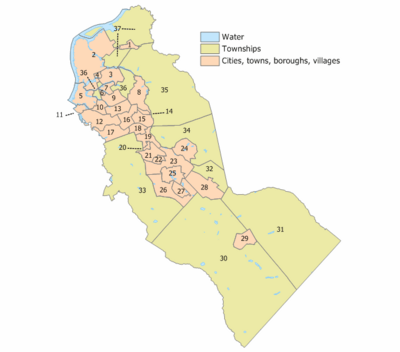 Municipalities in Camden County (with 2010 Census data for population, housing units and area) are:

Defunct municipalities in the county (with years of formation and dissolution listed in parentheses) include:

Perkins Center for the Arts has locations in Moorestown and Collingswood.

Matthew Quick's novel The Silver Linings Playbook takes place in Collingswood and Voorhees, although the screen adaptation is set in Pennsylvania.

The Last Broadcast was partially filmed in the Pine Barrens.

Harold and Kumar Go to White Castle is partially set in Cherry Hill.

Camden was the setting for several scenes in 12 Monkeys.

Other limited access roads that pass through are the Atlantic City Expressway and the New Jersey Turnpike. There are five ACE interchanges that are within the county borders: Exits 44 (at NJ 42), 41 (at Berlin-Cross Keys Road / CR 689), 38 (at Williamstown-New Freedom Road / CR 536 Spur), 33 (connecting to NJ 73) and 31 (at NJ 73). The only turnpike interchange that is in the county is Exit 3 at the border of Runnemede and Bellmawr.

The River Line is a diesel tram-train light-rail system operated for New Jersey Transit by the Southern New Jersey Rail Group on a former Pennsylvania Railroad line from Trenton. Most stations in the county are in the City of Camden, including the Walter Rand Transportation Center, except for the Pennsauken Transit Center located in Pennsauken Township.

The PATCO Speedline, owned by the Delaware River Port Authority, runs a rapid transit line across the Ben Franklin Bridge from Philadelphia through Camden to the PRSL main right-of-way between Haddonfield and its eastern terminus in Lindenwold. Suburban station stops include Woodcrest, Westmont and Collingswood.

New Jersey Transit provides commuter and long distance bus service from many locations in the county to Philadelphia, with additional service to Atlantic City, New Jersey. Extensive local service is offered within the county, including routes to Camden and area train and light rail stations.

Based on data from the Bureau of Economic Analysis, Camden County had a gross domestic product (GDP) of $23.8 billion in 2018, which was ranked 11th in New Jersey and represented an increase of 2.5% from the previous year.

Rutgers University-Camden is located in the downtown/waterfront district of Camden, and dates back to 1926 with the founding of the South Jersey Law School.

Rutgers School of Law–Camden is one of two campuses of Rutgers Law School, the other being in Newark.

The Rowan University School of Osteopathic Medicine is located in Stratford and dates to 1976. It is the state's only osteopathic medical school and was South Jersey's first four-year college of medicine.

The Cooper Medical School of Rowan University is located in the downtown/university district of Camden. Established as a four-year medical school in 1975, the relationship with Rowan University was formed in 2008.

Rutgers Biomedical and Health Sciences has a campus in Stratford which hosts its dental school and school of public health.

Rowan University at Camden is located on Cooper Street in Camden and offers undergraduate and graduate degrees.

Camden County College is a two-year public community college serving students from Camden County. The school has campuses in Blackwood, Camden and Cherry Hill, and was founded in 1967.

All content from Kiddle encyclopedia articles (including the article images and facts) can be freely used under Attribution-ShareAlike license, unless stated otherwise. Cite this article:
Camden County, New Jersey Facts for Kids. Kiddle Encyclopedia.