Gloucester County is a county located in the U.S. state of New Jersey. As of the 2016 Census estimate, the county's population was 292,330, making it the state's 14th-most populous county, an increase of 1.4% from the 2010 United States Census, when its population was enumerated at 288,288, in turn an increase of 33,615 (+13.2%) from the 254,673 counted in the 2000 U.S. Census. The percentage increase in the county's population between 2000 and 2010 was the largest in New Jersey, almost triple the statewide increase of 4.5%, and the absolute increase in residents was the third highest. Its county seat is Woodbury.

Gloucester County is largely composed of low-lying rivers and coastal plains. The highest elevation in the county is a slight rise along County Route 654 southeast of Cross Keys that reaches approximately 180 feet (55 m) above sea level; the lowest point is at sea level on the Delaware River. 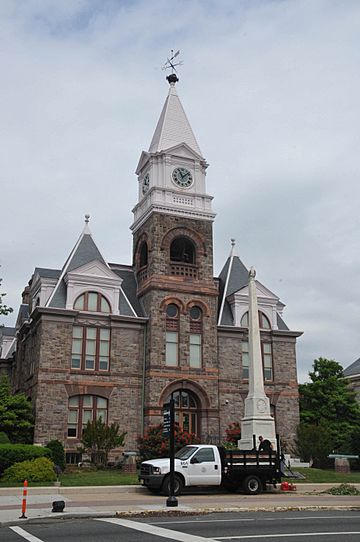 Swedesboro and Bridgeport were the among the earliest European settlements in New Jersey as a part of the 17th century New Sweden colony. Gloucester dates back to May 26, 1686, when courts were established separate from those of Burlington. It was officially formed and its boundaries defined as part of West Jersey on May 17, 1694. Portions of Gloucester County were set off on February 7, 1837, to create Atlantic County, and on March 13, 1844 to create Camden County. The county was named for the city of Gloucester / county of Gloucestershire in England.

Woodbury, founded in 1683 by Henry Wood, is the oldest municipality in the county. National Park, another town in the county, was the site of the Revolutionary War Battle of Red Bank where Fort Mercer once stood. It is now the site of Red Bank Battlefield Park and the remains of the HMS Augusta laid there until they were moved and subsequently re sunk in Gloucester City on their way to Philadelphia. During the colonial era, Gloucester County's main economic activity was agriculture. Woodbury was the site of the county courthouse, the county jail, a Quaker meeting house (still in existence), and an inn (on the current location of Woodbury Crossings). Because of the county's many creeks leading to the Delaware River and the Atlantic Ocean, smuggling was very common.

There were 104,271 households out of which 33.4% had children under the age of 18 living with them, 55.6% were married couples living together, 12.4% had a female householder with no husband present, and 27.3% were non-families. 22% of all households were made up of individuals, and 8.9% had someone living alone who was 65 years of age or older. The average household size was 2.72 and the average family size was 3.2.

Interstate 295 is the only interstate in the county which also runs through the northwest for about 14 miles. The New Jersey Turnpike also passes through in the northwest. Only one turnpike interchange is located within Gloucester: Exit 2 in Woolwich.

The Glassboro–Camden Line is a proposed 18-mile (28.97 km) diesel multiple unit (DMU) light rail system planned to connect with the River LINE and PATCO Speedline in Camden and expected to be in operation in 2019.

The Port of Paulsboro is located on the Delaware River and Mantua Creek in and around Paulsboro. Traditionally one of the nation's busiest for marine transfer operations of petroleum products, the port is being redeveloped as an adaptable omniport able to handle bulk, break bulk cargo and shipping containers. Studies completed in 2012 concluded that the port is well suited to become a center for the manufacture, assembly, and transport of wind turbines and platforms the development of wind power in New Jersey 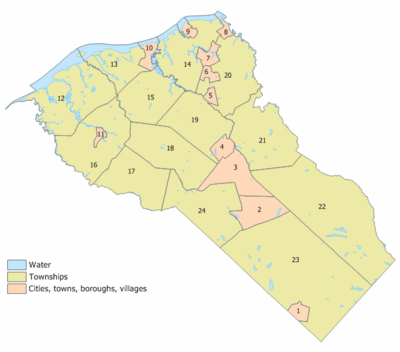 The following municipalities in Gloucester County (with 2010 Census data for population, housing units and area) are:

All content from Kiddle encyclopedia articles (including the article images and facts) can be freely used under Attribution-ShareAlike license, unless stated otherwise. Cite this article:
Gloucester County, New Jersey Facts for Kids. Kiddle Encyclopedia.