Atlantic County is a county located along the southern coast of the U.S. state of New Jersey. As of the 2020 United States Census, the county had a population of 274,534, a -0.005 change from the 274,549 enumerated in the 2010 Census. Its county seat is the Mays Landing section of Hamilton Township. The most populous place was Egg Harbor Township, with 43,323 residents at the time of the 2010 Census; Galloway Township, covered 115.21 square miles (298.4 km2), the largest total area of any municipality, though Hamilton Township has the largest land area, covering 111.13 square miles (287.8 km2). Atlantic County forms the Atlantic City–Hammonton Metropolitan Statistical Area, which is also part of the Delaware Valley Combined Statistical Area.

All of what is known today as Atlantic County was once called Egg Harbor Township, the eastern half of the original County of Gloucester. Named as an official district as early as 1693, it was bounded on the north by the Little Egg Harbor River (now known as the Mullica River), and on the south by the Great Egg Harbor River and its southern branch the Tuckahoe River. Its eastern boundary was the Atlantic Ocean, but the western boundary in the South Jersey interior was not fixed until 1761. The county was formally created from portions of Gloucester County as of February 7, 1837, and consisted of the townships of Egg Harbor, Galloway, Hamilton and Weymouth.

Atlantic County is located in the Atlantic Coastal Plain in the southeastern part of New Jersey.

Topographically, much of Atlantic County is low-lying and flat. The highest elevation, approximately 150 feet (46 m) above sea level, is found at two areas next to the New Jersey Transit passenger rail line just west of Hammonton. Sea level is the lowest point. 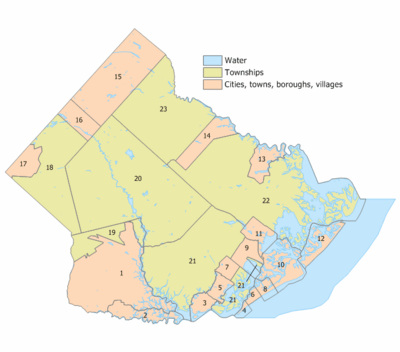 Municipalities in Atlantic County (with 2010 Census data for population, housing units and area) are: 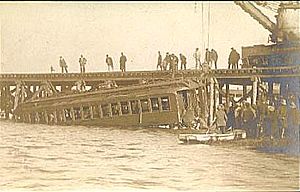 The indigenous people of New Jersey developed a series of trails across the state, including one from current-day Absecon to Camden. Early transportation relied on the region's waterways. An early coastal road was constructed in 1716 from Somers Point to Nacote Creek in Port Republic. Roads into the county's interior were slow, unreliable, and muddy, with one main roadway along the Mullica River that eventually connected to Burlington. Roads later connected the region's industries in the 19th century, until the county's first railroad opened in 1854, which brought more people to the region. By 1870, the Camden and Atlantic Railroad Company carried 417,000 people each year. Also in that year, the Pleasantville and Atlantic Turnpike opened, crossing Beach Thorofare into Atlantic City. A railroad competitor, the Philadelphia and Atlantic City Railway, opened in 1877 after only 90 days of construction. Other rail lines connected farms and cities throughout the county by the end of the 19th century. A notable railroad tragedy occurred on October 28, 1906, when three train cars derailed on a draw bridge into 30 ft (9.1 m) deep water in Beach Thorofare, with only two survivors. Improved roads reduced the reliance on railroads by the 1950s.

In the late 1800s, a bridge opened in Mays Landing, providing road access to the county's interior. The first car in Atlantic City was seen in 1899. By the 1890s, visitors began riding bicycles in the coastal resort towns, and thousands of people would ride from Camden to the coast on weekends. Amid pressure from motorists and cyclists, the county improved the conditions of the roads in the early 20th century. The first road bridge to Atlantic City opened in 1905, using Albany Avenue on what is now US 40/322. In 1916, the causeway that is now New Jersey Route 152 opened between Somers Point and Longport. In 1919, the White Horse Pike (US 30) was completed from Atlantic City to Camden, and repaved through the county in 1925. Also in 1922, the Harding Highway (US 40) opened from Pennsville Township to Atlantic City, named after then-President Warren G. Harding. In 1928, the Beesley's Point Bridge opened, replacing the ferry between Somers Point and Cape May County. The Black Horse Pike (US 322) opened in 1935, connecting Atlantic City to Camden. Most of the county's older bridges were replaced over time, although the oldest still in existence is a swing bridge from 1904 that crosses Nacote Creek in Port Republic. The Great Egg Harbor Bridge opened in 1956, marking the completion of the Garden State Parkway, which connected Cape May and Atlantic counties, continuing to North Jersey. In 1964, the Atlantic City Expressway opened between the Parkway and Camden County, and a year later was extended into Atlantic City. In 2001, the Atlantic City–Brigantine Connector was built, connecting the Expressway with Atlantic City's marina district.

As early as 1990, the South Jersey Transportation Authority had plans to construct an Atlantic County Beltway as a limited-access road, beginning along Ocean Heights Avenue in southern Egg Harbor Township at a proposed Exit 32 with the Garden State Parkway. The proposed road would pass west of the Atlantic City Airport and reconnect with the Parkway at Exit 44 via County Route 575 in Galloway Township. The routing was later truncated from U.S. 40 (the Black Horse Pike) to Exit 44 on the Parkway. The project was considered "desirable" but was not funded.

NJ Transit's Atlantic City Line connects the Atlantic City Rail Terminal in Atlantic City with the 30th Street Station in Philadelphia, with service at intermediate stations at Hammonton, Egg Harbor City and Absecon in the county.

Based on data from the Bureau of Economic Analysis, Atlantic County had a gross domestic product (GDP) of $12.9 billion in 2018, which was ranked 15th in the state and represented an increase of 3.5% from the previous year.

When Atlantic County was first established in 1837, its sparse population subsided on clams, oysters, and fishing. An early industry was shipbuilding, using the sturdy oak trees of the Pine Barrens. Bog iron furnaces opened in the early 1800s, but declined by the 1850s due to the growth of the Philadelphia iron industry. Around this time, several people and cotton mills opened. The first railroad across the county opened in 1854, intended to assist the bog iron industry; instead, it spurred development in Atlantic City, as well as the growth of farming towns. Farmers began growing grapes, cranberries, and blueberries. The competition dropped the price of travel to 50¢, affordable for Philadelphia's working class. Travelers often brought their lunch in shoe boxes, leading to their nickname "shoobies".

Legalized gambling and the growth of the casino industry employed more than 34,145 people as of 2012.

In 1864, Louis Nicholas Renault brought property in Egg Harbor City and opened Renault Winery, the oldest active winery in New Jersey, and third-oldest in the United States. During the prohibition era, the winery obtained a government permit to sell wine tonic for medicinal purposes. Tomasello Winery grew its first vineyard in 1888, and opened to the public in 1933. Gross Highland Winery operated in Absecon from 1934 to 1987, when it was sold to developers. Balic Winery opened in 1966 in Mays Landing, although its vineyards date back to the early 19th century. Sylvin Farms Winery opened in 1985 in Egg Harbor City. In 2001, Bellview Winery opened in the Landisville section of Buena. A year later, DiMatteo Vineyards opened in Hammonton, and in 2007, Plagido's Winery opened in the same town.

In 1998, Tun Tavern Brewery opened in Atlantic City across from the Atlantic City Convention Center, named after the original Tun Tavern in Philadelphia, which was the oldest brew house in the country, opening in 1685. In 2015, Tuckahoe Brewing moved from Ocean View to a facility in Egg Harbor Township capable of producing four times the amount of beer. Garden State Beer Company opened in 2016 in Galloway. In 2018, Hidden Sands Brewery opened in Egg Harbor Township.

All content from Kiddle encyclopedia articles (including the article images and facts) can be freely used under Attribution-ShareAlike license, unless stated otherwise. Cite this article:
Atlantic County, New Jersey Facts for Kids. Kiddle Encyclopedia.