What is now the City of Brigantine has passed through a series of names and re-incorporations since it was first created. The area was originally incorporated as Brigantine Beach Borough by an act of the New Jersey Legislature on June 14, 1890, from portions of Galloway Township, based on the results of a referendum held on June 3, 1890. On April 23, 1897, the area was reincorporated as the City of Brigantine City. This name lasted until April 9, 1914, when it was renamed the City of East Atlantic City. On March 16, 1924, Brigantine was incorporated as a city, replacing East Atlantic City and incorporating further portions of Galloway Township. The borough was named for the many shipwrecks in the area, including those of brigantines.

New Jersey Monthly magazine ranked Brigantine as its 36th best place to live in its 2008 rankings of the "Best Places To Live" in New Jersey.

The climate in this area is characterized by hot, humid summers and generally mild to cool winters. According to the Köppen Climate Classification system, Brigantine has a humid subtropical climate, abbreviated "Cfa" on climate maps. 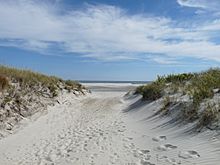 Beach at Brigantine, on the Atlantic Ocean side of the island

NJ Transit provide bus service to and from Atlantic City on the 501 route.

The Brigantine Public Schools serves students in pre-kindergarten through eighth grade. As of the 2018–19 school year, the district, comprised of two schools, had an enrollment of 563 students and 68.0 classroom teachers (on an FTE basis), for a student–teacher ratio of 8.3:1. The district's board of education has seven members who set policy and oversee the fiscal and educational operation of the district through its administration. As a Type I school district, the board's trustees are appointed by the Mayor to serve three-year terms of office on a staggered basis, with either two or three members up for reappointment each year. Of the more than 600 school districts statewide, Brigantine is one of 15 districts with appointed school districts. Schools in the district (with 2018–19 enrollment data from the National Center for Education Statistics) are Brigantine Elementary School with 329 students in grades PreK-4 and Brigantine North Middle School with 254 students in grades 5–8.

Students in public school for ninth through twelfth grades, along with those from Longport, Margate City and Ventnor City, attend Atlantic City High School in neighboring Atlantic City, as part of sending/receiving relationships with the Atlantic City School District. As of the 2018–19 school year, the high school had an enrollment of 1,796 students and 153.0 classroom teachers (on an FTE basis), for a student–teacher ratio of 11.7:1.

People who were born in, residents of, or otherwise closely associated with Brigantine include:

All content from Kiddle encyclopedia articles (including the article images and facts) can be freely used under Attribution-ShareAlike license, unless stated otherwise. Cite this article:
Brigantine, New Jersey Facts for Kids. Kiddle Encyclopedia.