The piping plover (Charadrius melodus) is a small sand-colored, sparrow-sized shorebird that nests and feeds along coastal sand and gravel beaches in North America. The adult has yellow-orange-red legs, a black band across the forehead from eye to eye, and a black stripe running along the breast line. This chest band is usually thicker in males during the breeding season, and it is the only reliable way to tell the sexes apart. The bird is difficult to see when it is standing still, as it blends well with open, sandy beach habitats. It typically runs in short spurts and stops.

Total population is currently estimated at about 6,510 individuals. A preliminary estimate showed 3,350 birds in 2003 on the Atlantic Coast alone, 52% of the total. The population has been increasing since 1999.

Their breeding habitat includes beaches and sand flats on the Atlantic coast, the shores of the Great Lakes, and in the mid-west of Canada and the United States. They nest on sandy or gravel beaches or shoals. These shorebirds forage for food on beaches, usually by sight, moving across the beaches in short bursts. Generally, piping plovers will voyage for food around the high tide wrack zone and along the water's edge. They eat mainly insects, marine worms, and crustaceans. 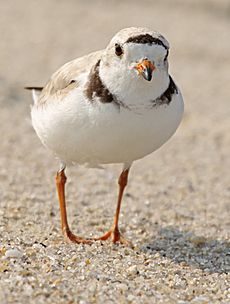 On the Atlantic coast, Cape May, New Jersey, USA

The piping plover is a stout bird with a large rounded head, a short thick neck, and a stubby bill. It is a sand-colored, dull gray/khaki, sparrow-sized shorebird. The adult has yellow-orange legs, a black band across the forehead from eye to eye, and a black ring around the neck during the breeding season. During nonbreeding season, the black bands become less pronounced. Its bill is orange with a black tip. It ranges from 15–19 cm (5.9–7.5 in) in length, with a wingspan of 35–41 cm (14–16 in) and a mass of 42–64 g (1.5–2.3 oz).

The piping plover's light call is a soft, whistled peep peep given by standing and flying birds. Its frequently heard alarm call is a soft pee-werp, which the second syllable lower pitched.

The piping plover lives the majority of its life on open sandy beaches or rocky shores, often in high, dry sections away from water. They can be found on the Atlantic Coast of the U.S. and Canada on the ocean or bay beaches and on the Great Lakes shores. It builds its nests higher on the shore near beach grass and other objects. It is very rare to see a piping plover anywhere outside of sand or rocky beaches/shores while not migrating. Piping plovers are often found to migrate south to The Bahamas during winter months. They have also been recorded across Cuba, with sparser occurrences elsewhere virtually throughout the West Indies, and even Ecuador and Venezuela.

Piping plovers migrate from their northern range in the summer to the south in the winter months, migrating to the Gulf of Mexico, the southern Atlantic coast of the United States and the Caribbean. They begin migrating north in mid-March. Their breeding grounds extend from southern Newfoundland south to the northern parts of South Carolina. Migration south begins in August for some adults and fledglings, and by mid-September most piping plovers have headed south for winter. 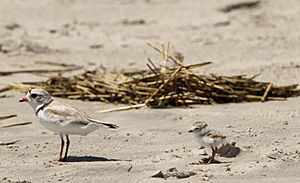 Parent and chick on the Atlantic coast, Cape May, New Jersey, USA 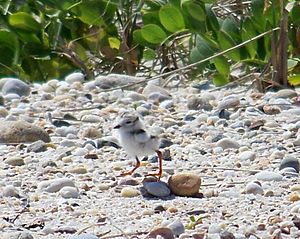 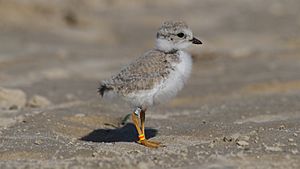 The piping plover usually arrives at sandy beaches to breed in mid to late April.

Males will begin claiming territories and pairing up in late March. When pairs are formed, the male begins digging out several scrapes (nests) along the high shore near the beach-grass line. The males also perform elaborate courtship ceremonies, including stone tossing and courtship flights featuring repeated dives. Scrapes, small depressions in the sand dug by kicking the sand, are often in the same area that least terns choose to colonize. Females will sit and evaluate the scrapes, then choose a good scrape and decorate the nest with shells and debris to camouflage it. Once a scrape is seen as sufficient, the female will allow the male to copulate with her. The male begins a mating ritual of standing upright and "marching" towards the female, puffing himself up and quickly stomping his legs. If the female had seen the scrape as adequate, she will allow the male to stand on her back and copulation occurs within a few minutes.

Most first-time nest attempts in each breeding season are four-egg nests which appear as early as mid-to-late April. Females lay one egg every other day. Second, third and sometimes fourth nesting attempts may have only three or two eggs. Incubation of the nest is shared by both the male and the female. Incubation is generally 27 days and eggs usually all hatch on the same day.

After chicks hatch, they are able to feed within hours. The adults' role is then to protect them from the elements by brooding them. They also alert them to any danger. Like many other species of plovers, adult piping plovers will often feign a "broken wing display", drawing attention to themselves and away from the chicks when a predator may be threatening the chicks' safety. The broken wing display is also used during the nesting period to distract predators from the nest. A major defense mechanism of the chicks is their ability to blend in with the sand. It takes about 30 days before chicks achieve flight capability. They must be able to fly at least 50 yd (46 m) before they can be considered fledglings.

To protect the nests from predators during incubation, many conservationists use exclosures, such as round turkey-wire cages with screened tops. These allow the adults to move in and out but stop predators from getting to the eggs. After the chicks hatch, many areas will put up snow fencing to restrict driving and pets for the safety of the chicks. Threats to nests include crows, cats, raccoons, and foxes, among others. Exclosures are not always used, as they occasionally draw more attention to the nest than would occur without the exclosure. Natural hazards to eggs or chicks include storms, high winds, and abnormal high tides; human disturbances can cause the abandonment of nests and chicks as well. It is best to stay away from any bird that appears distressed to prevent any unintended consequences.

The piping plover is globally threatened and endangered; it is uncommon and local within its range, and has been listed by the United States as "endangered" in the Great Lakes region and "threatened" in the remainder of its breeding range. While it is federally threatened, the piping plover has been listed as state endangered in Illinois, Indiana, Iowa, Maine, Michigan, Minnesota, Nebraska, New Hampshire, New York, New Jersey, Ohio, Pennsylvania, and Wisconsin. The Parker River Refuge on Plum Island, Massachusetts is a national network of lands and rivers dedicated to the safety of its native wildlife and specifically the Piping Plover. Protecting the Piper with full beach closures, the Refuge now "has the second largest plover population on the North Shore".

In eastern Canada, the piping plover is found only on coastal beaches. In 1985, it was declared an endangered species by the Committee on the Status of Endangered Wildlife in Canada. A large population in Ontario has disappeared entirely. In 2008, however, piping plover nests were found at Wasaga Beach and near Sauble Beach, Ontario, along the Ontario Great Lakes shores. There is also some evidence of nesting at other sites in Ontario, including Port Elgin, Ontario in 2014.

In the 19th century and early 20th century, the piping plover was utilized for its feathers, as were many other birds at the time, as decorations for women's hats. These decorations, called plumes, became a symbol of high society, especially those from larger rare birds. This practice led to its initial population decline. The Migratory Bird Treaty Act of 1918 helped the population recover through the 1930s. The second decline in the piping plover's population and range has been attributed to increased development, shoreline stabilization efforts, habitat loss and human activity near nesting sites in the decades following World War II. The Great Lakes populations eventually shrank to only around two dozen. On the Missouri River sandbars, the number of breeding individuals varied, with the population increasing from 2012 to 2017 following a major habitat creation event.

Critical nesting habitats are now being protected to help the population during its breeding season. Populations have seen significant increases since the protection programs began, but the species remains in serious danger. Current conservation strategies include identification and preservation of known nesting sites; public education; limiting or preventing pedestrian and/or off-road vehicle (ORV) traffic near nests and hatched chicks; limiting predation of free-ranging cats, dogs and other pets on breeding pairs, eggs and chicks; and removal of foxes, raccoons, skunks, and other predators.

In coastal areas such as Plymouth, Cape Cod, Long Island, Sandy Hook, Cape Henlopen State Park in Delaware, North Manitou Island in Lake Michigan, and most recently, Cape Hatteras National Seashore on the Outer Banks of North Carolina, beach access to pedestrians and ORVs has been limited to protect piping plovers and their chicks at critical times of the breeding season.

Various environmental organizations are involved in aiding restoration efforts. The Goldenrod Foundation [1] unsuccessfully filed suit against the Town of Plymouth in 2010 and 2015 to restrict offroad vehicle access to breeding habitat.

In 2019, the first documented pair of piping plovers in Chicago nested at Montrose Beach. Three chicks hatched in July, becoming the first within Cook County in 60 years. Threats to the nest and chicks included a planned music festival in August. In July 2019, Mamby music festival canceled the event. The pair spotted in 2019 returned to the area in 2020, with the first chick hatching in June 2020.

As shorebirds, piping plovers may potentially be highly impacted by climate change in the future as it affects their aquatic and their terrestrial habitats.

A main part of the piping plover’s range is in the Prairie Pothole Region of South Dakota, North Dakota, and Canada. The shallow wetlands of this region fluctuate water surface area in response to wet-dry periods. Piping plovers who breed in this region depend on the decreased water levels to reveal shorelines that they use for nesting. Climate change, along with consolidation drainage, drainage of smaller wetlands into another wetland to create fewer, larger wetlands, has begun to create fuller wetlands, reducing shoreline nesting habitat. Research of 32 piping plover wetland habitats in this region found that wetlands with risen water levels had lower chances of piping plover presence. This suggests that the warming climate and increased water levels and precipitation will degrade piping plover breeding habitats in the Prairie Pothole Region.

All content from Kiddle encyclopedia articles (including the article images and facts) can be freely used under Attribution-ShareAlike license, unless stated otherwise. Cite this article:
Piping plover Facts for Kids. Kiddle Encyclopedia.