Cape Hatteras National Seashore is a United States national seashore which preserves the portion of the Outer Banks of North Carolina from Bodie Island to Ocracoke Island, stretching over 70 miles (110 km), and is managed by the National Park Service. Included within this section of barrier islands along N.C. 12, but outside the national seashore boundaries, are Pea Island National Wildlife Refuge and several communities, such as Rodanthe, Buxton, and Ocracoke. Cape Hatteras is a combination of natural and cultural resources, and provides a wide variety of recreational opportunities.

Once dubbed the "Graveyard of the Atlantic" for its treacherous currents, shoals, and storms, Cape Hatteras has a wealth of history relating to shipwrecks, lighthouses, and the US Lifesaving Service. The islands also provide a variety of habitats and are a valuable wintering area for migrating waterfowl. The park's fishing and surfing are considered the best on the East Coast.

There are three visitor centers, each located on a barrier island. The visitor centers offer information about the Cape Hatteras National Seashore, ranger programs, and a bookstore. 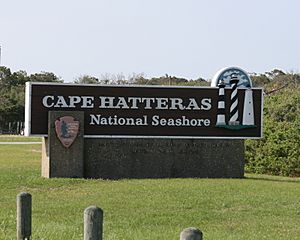 Cape Hatteras National Seashore was authorized by Congress on August 17, 1937. The funds to purchase much of the land for Cape Hatteras National Seashore were donated by multi-millionaire philanthropist Paul Mellon. On June 29, 1940, the name of the park was changed by the U.S. Congress to Cape Hatteras National Seashore Recreational Area. The name change was done to accommodate hunting interests, which at that time was a unique allowance for a National Park Service managed entity. The park was officially established as the first national seashore on January 12, 1953, and dedicated on April 24, 1958, and is currently co-managed with two other Outer Banks parks, Wright Brothers National Memorial in Kill Devil Hills and Fort Raleigh National Historic Site on Roanoke Island. It is headquartered at Fort Raleigh. 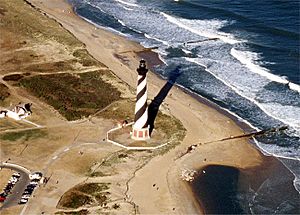 Cape Hatteras Lighthouse, prior to its move in 1999

In October 2007, Defenders of Wildlife, along with the National Audubon Society, sued the National Park Service at Cape Hatteras National Seashore for not properly protecting shorebird and sea turtle species that nest on the beaches of the Park.

The Park Service was found not to be in compliance with an executive order requiring the establishment of policies and procedures regarding off-road vehicle use on the National Seashore, failing to implement management plans to adequately protect the shorebirds and sea turtles nesting in the park. The Defenders of Wildlife have claimed that the use of off-road vehicles on park lands has degraded the habitat used by the nesting birds, many of which are also federally protected species.

Many of the beaches and beach access points were placed off limits to off road vehicle use during the months when the birds are nesting. This became a contentious issue among some residents and users of Hatteras Island as ORV access is considered by some to be an important part of regional culture and economics, despite a 2008 study that found that only 3-4% of annual visitors to the National Seashore are ORV users.

In January 2012, the National Park Service instituted its new, and final, ORV management plan. Twenty-eight of the seashore’s 67 miles are set aside as year-round ORV routes, with only 26 miles designated as year-round vehicle-free areas for pedestrians, families, and wildlife. The remaining 13 miles of seashore are seasonally open to ORVs. For instance, during the first week of July 2012, while less than 20 miles of the beaches are accessible by ORVs, an additional 31.6 miles were open to pedestrians, meaning 78% of the Seashore was open to visitors in some form. The plan also proposes new parking facilities, ORV ramps, and water shuttles to increase visitor access to beaches.

All content from Kiddle encyclopedia articles (including the article images and facts) can be freely used under Attribution-ShareAlike license, unless stated otherwise. Cite this article:
Cape Hatteras National Seashore Facts for Kids. Kiddle Encyclopedia.