Ocracoke is a census-designated place (CDP) and unincorporated town located at the southern end of Ocracoke Island, located entirely within Hyde County, North Carolina. The population was 948 as of the 2010 Census. As of 2014, Ocracoke's population was 591. It is also the location of the pirate Blackbeard's death in November 1718.

The Outer Banks area was occasionally visited by Algonquian-speaking Native Americans, but was never permanently settled. Ocracoke, then called Wokokkon, was used as a subsistence hunting and fishing ground for the Hatterask Indians. Yaupon Tea or Black Drink, made from the dried leaves of the indigenous yaupon, a native holly, was used ceremonially by the Native Americans in the area. A small village on Hatteras Island is said to have had forty fighting men. The area was first described in detail by Giovanni da Verrazzano, an Italian navigator, in 1524. Verrazzano was unable to navigate the tortuous channels leading into the Pamlico Sound and assumed that China lay beyond the Outer Banks. 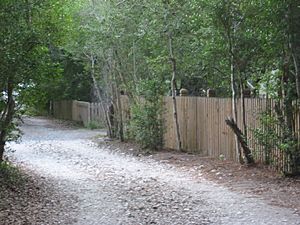 In 1585, Sir Walter Raleigh's colony, in their ship the Tiger, in search of Roanoke Island collided with a sand bar in Ocracoke Inlet and were forced to land on the island for repairs.

An attempt at an English settlement was tried at Roanoke Island in the late 16th century, but it failed. This effectively halted European settlement until 1663, when Carolina Colony was chartered by King Charles II. However, remote Ocracoke Island was not permanently settled until 1750, being a pirate haven at times before then. It was a favorite anchorage of Edward Teach, better known as the pirate Blackbeard. He was killed in a fierce battle with troops from Virginia on November 22, 1718. The grounds of what is now the Springer's Point Nature Preserve were said to be the pirate's favored hang-out during those days. 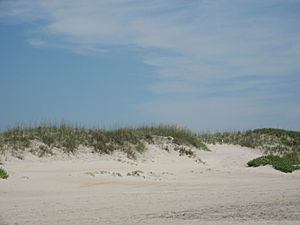 Throughout the mid-to-late 18th century, the Island was home to a number of especially skilled schooner pilots, who could get smaller ships through the inlet to the Pamlico Sound. As population increased on the mainland, demand for transshipment of goods from ocean-going vessels increased. The population was listed as 139 in the 1800 census. Warehouses were built to hold goods off-loaded from larger ships offshore and then loaded onto smaller schooners to be delivered to plantations and towns along the mainland rivers.

By the late 19th century, the shipping business was gone, and the United States Lifesaving Service became a major source of steady income for local men. Fishing, including charters for tourists, became more important to the livelihood of the area.

The Ocracoke Historic District, Ocracoke Light Station, and Salter-Battle Hunting and Fishing Lodge are listed on the National Register of Historic Places.

In August and September 1933 and again in September 1944 and August 1949 major hurricanes struck the island. Interestingly the first person accounts of these storms were recorded on the walls of the "Hurricane House." 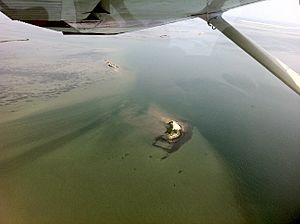 Fort Ocracoke, a Confederate fortification constructed at the beginning of the American Civil War, was situated on Beacon Island in Ocracoke Inlet, two miles to the west-southwest of Ocracoke village. The octagonally shaped fort was built on a previous War of 1812 site. It was also known as Fort Morgan or possibly Fort Morris and at one point nearly 500 Confederate troops were stationed in and around Ocracoke and the fort. The Confederates abandoned and partially destroyed the fort in August 1861 after Union victories on nearby Hatteras Island. Union forces razed it a month later on September 17, 1861. Beacon Island and the fort subsided beneath the waves of the inlet after the 1933 hurricanes that struck the area. The remnants of Fort Ocracoke were relocated and identified in 1998 by the Surface Interval Diving Company. 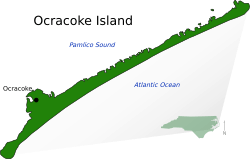 The island of Ocracoke is a part of the Outer Banks of North Carolina. It is one of the most remote islands in the Outer Banks, as it can only be reached by one of three public ferries (two of which are toll ferries), private boat, or private plane. Other than the village of Ocracoke and a few other areas (a ferry terminal, a pony pen, a small runway), the entire island is part of the Cape Hatteras National Seashore. 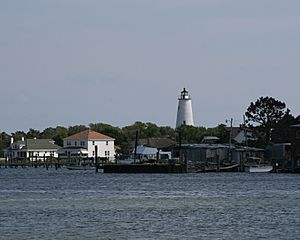 The village of Ocracoke is located around a small sheltered harbor called Silver Lake, with a second smaller residential area built around a series of man-made canals called Oyster Creek. The village is located at the widest point of the island, protected from the Atlantic Ocean by sand dunes and a salt marsh. The average height of the island is less than five feet above sea level, and many of the buildings on the island are built on pilings to lift them off the ground. Flooding is a risk during both hurricanes and large storms. Ocracoke Lighthouse is situated near Silver Lake and has remained in continuous operation since 1823. 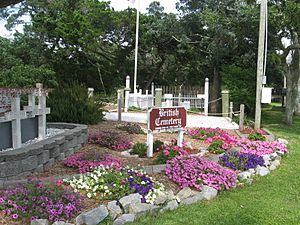 The island is also home to a British cemetery. During World War II, German submarines sank several British ships including the HMT Bedfordshire, and the bodies of British sailors were washed ashore. They were buried in a cemetery on the island. A lease for the 2,290-square-foot (213 m2) plot, where a British flag flies at all times, was given to the Commonwealth War Graves Commission for as long as the land remained a cemetery, and the small site officially became a British cemetery. The United States Coast Guard station on Ocracoke Island takes care of the property. A memorial ceremony is held each year in May. 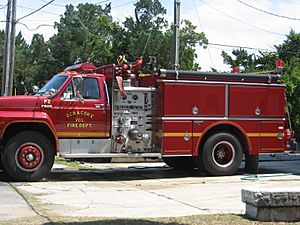 A single paved two-lane road, NC 12, runs from the village at the southern end of the island to the ferry dock at the northern tip of the island, where a 40-minute-long free ferry connects to Hatteras Island. The second ferry dock, located in the village, has toll connections to Swan Quarter, North Carolina on the mainland and Cedar Island, near Atlantic, North Carolina.

A passenger ferry operates across Ocracoke Inlet to the deserted village of Portsmouth, at the northern end of the Core Banks.

Ocracoke Island Airport (FAA Identifier W95) is located slightly south-east of the village, allowing small aircraft to land. The average commute time on the island is 3 minutes. The National Average is 25 minutes.

Ocracoke Island historically had its own distinct dialect of English, often referred to as a brogue. The dialect is known as the high tider dialect, after the characteristic phrase "high tide," pronounced somewhat like "hoi toid", Due to the influx of tourists and greater contact with the mainland in recent years, however, the Ocracoke brogue has been increasingly influenced by outside dialects. 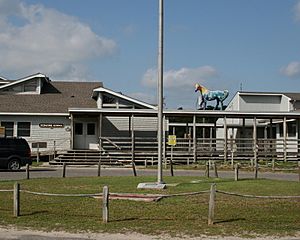 There were 370 households out of which 17.6% had children under the age of 18 living with them, 46.8% were married couples living together, 8.9% had a female householder with no husband present, and 40.8% were non-families. 30.8% of all households were composed of individuals and 8.9% had someone living alone who was 65 years of age or older. The average household size was 2.08 and the average family size was 2.55. 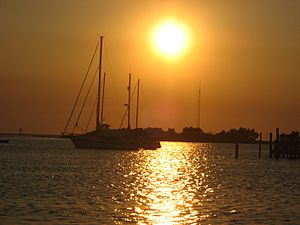 The economy of Ocracoke Island is based almost entirely on tourism. During the winter, the population shrinks and only a few businesses remain open. During the spring, summer, and early fall, an influx of tourists occupies hotels, campgrounds and weekly rental houses—and day visitors arrive by ferry from Hatteras Island.

Aa brewery, dozens of restaurants, and many shops, stores and other tourist-based businesses open for the tourist season. Visitors can find many shops that feature local, handmade goods, as well as imported artisanal goods and rare antiques, unusual for such a small island. 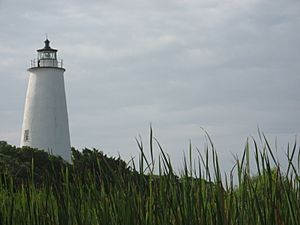 On November 4, 1987, the world record 13-pound (5.9 kg) Spanish mackerel was caught on a boat owned by Woody Outlaw off Ocracoke. The fish that set this world record exceeded the previous record by almost 20%.

During the winter, the island's only main employers are construction, the NC Department of Transportation, and the businesses that support the small population. Many islanders use the winter as time off, since they tend to work between 60 and 80 hours a week during the tourist season.

In Ocracoke, figs and fig cake are a prominent part of the town's cuisine, and the town has an annual fig festival that includes a fig cake contest.

All content from Kiddle encyclopedia articles (including the article images and facts) can be freely used under Attribution-ShareAlike license, unless stated otherwise. Cite this article:
Ocracoke, North Carolina Facts for Kids. Kiddle Encyclopedia.