Kids Encyclopedia Facts
Not to be confused with Cedar Point, North Carolina. 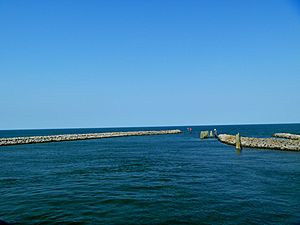 Cedar Island is an island and a small coastal unincorporated community in eastern North Carolina, United States. It is located in Carteret County. It was populated with local Native Americans prior to the arrival of European settlers. It is also the location of the state ferry transportation system dock, where travel can be made across Pamlico Sound to the island and village of Ocracoke in Hyde County.

In 2005, the population of Cedar Island was about 350. Many residents are fishermen, though fishing is declining in the area. The other major employer is the North Carolina Ferry System. There are three churches on the island: Methodist, Free Will Baptist, and Primitive Baptist. The Methodist and Free Will Baptist maintain regular meetings and Sunday services. There are a few local businesses.

Cedar Island is about 4 miles (6.4 km) long, extending from the "Lola" village, down the bay, on the southeast end near the Core Sound and Lewis Creek, up to the Ferry Station at the north side of the island, bordering Pamlico Sound. The main village of Cedar Island, formerly known as "Roe" is located along the north central portion of the island. There is a fisherman's harbor in this area.

Cedar Island has sandy beaches backed up against stands of juniper (mistaken by early settlers for cedars) and pine. More than half of Cedar Island belongs to the (Federal) Cedar Island Wildlife Refuge. The refuge is open for hiking and has a headquarters and information kiosk at the south end of the island, near the end of Lola Road. There are boat ramps for public use.

All content from Kiddle encyclopedia articles (including the article images and facts) can be freely used under Attribution-ShareAlike license, unless stated otherwise. Cite this article:
Cedar Island, North Carolina Facts for Kids. Kiddle Encyclopedia.