Kids Encyclopedia Facts
Not to be confused with Beaufort, South Carolina or Beaufort County, North Carolina.

Beaufort ( BOH-fərt) is a town in and the county seat of Carteret County, North Carolina, United States. Established in 1713 and incorporated in 1723, Beaufort is the fourth oldest town in North Carolina (after Bath, New Bern and Edenton). On February 1, 2012, Beaufort was ranked as "America's Coolest Small Town" by readers of Budget Travel Magazine.

The population was 4,039 at the 2010 census. It is sometimes confused with a city of the same name in South Carolina; the two are distinguished by different pronunciations.

Beaufort is located in North Carolina's "Inner Banks" region. The town is home to the North Carolina Maritime Museum, the Duke University Marine Laboratory (Nicholas School of the Environment), and the National Oceanic and Atmospheric Administration (NOAA) Center for Coastal Fisheries and Habitat Research. It is also the location of the Rachel Carson Reserve, part of the N.C. Coastal Reserve and National Estuarine Research Reserve system.

The Beaufort Historic District, Carteret County Home, Gibbs House, Jacob Henry House, and Old Burying Ground are listed on the National Register of Historic Places. In June 1718 Blackbeard the pirate ran his flagship, the Queen Anne's Revenge and his sloop Adventure, aground near present-day Beaufort Inlet, NC. The Queen Anne's Revenge was added to the National Register of Historic Places in 2004 with the reference number 04000148. Thirty two years later, in August 1750, at least three Spanish merchantmen ran aground in North Carolina during a hurricane. One of the three, the El Salvador, sank near Cape Lookout.

U.S. Route 70 passes through Beaufort, leading west across the Newport River to Morehead City and northeast 31 miles (50 km) to its end in the town of Atlantic. 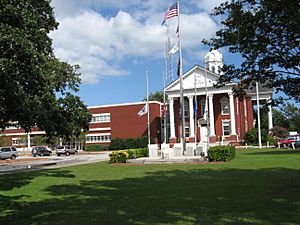 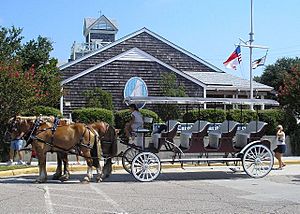 According to Beaufort Sister Cities, Inc., the city of Beaufort has 19 sister cities:

All content from Kiddle encyclopedia articles (including the article images and facts) can be freely used under Attribution-ShareAlike license, unless stated otherwise. Cite this article:
Beaufort, North Carolina Facts for Kids. Kiddle Encyclopedia.