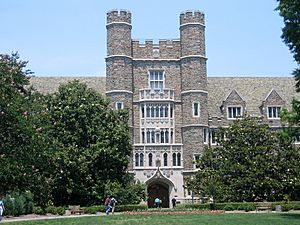 Entrance to the Duke Medical Center from West Campus

Duke University is a private university in Durham, North Carolina, founded in 1838. It was formed by Methodists and Quakers in the present-day town of Trinity. The school moved to Durham in 1892.

It has advanced research. Some famous people including former President of the United States, Richard Nixon went to the school. In its 2012 edition, U.S. News & World Report ranked the university's undergraduate program 10th among national universities.

Duke has good libraries, such as Bostock Library. It also has a famous medical school and law school. The school's colours are blue and white and its president is Richard Brodhead.

Duke has 26 varsity sports teams, known as the Blue Devils. Duke's athletic programs are considered among the very best in the NCAA. Duke's teams play in the Atlantic Coast Conference.

Its Men's Basketball Team under coach Mike Krzyzewski has won the NCAA Tournament four times, and bought out the 2015 title as well. In football The Blue Devils have won seven ACC Football Championships. They have had ten players honored as ACC Player of the Year (the most in the ACC), Duke's teams play in the Atlantic Coast Conference.

All content from Kiddle encyclopedia articles (including the article images and facts) can be freely used under Attribution-ShareAlike license, unless stated otherwise. Cite this article:
Duke University Facts for Kids. Kiddle Encyclopedia.