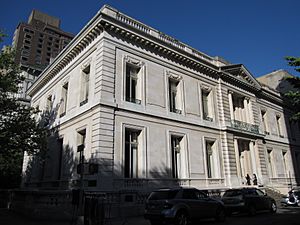 James Buchanan Duke (December 23, 1856 – October 10, 1925) was an American tobacco and electric power industrialist best known for the introduction of modern cigarette manufacture and marketing, and his involvement with Duke University.

James Buchanan Duke, known by the nickname "Buck", was born on December 23, 1856, near Durham, North Carolina, to industrialist and philanthropist Washington Duke (1820–1905) and his second wife, Artelia Roney Duke.

Duke's father, Washington, had owned a tobacco company that his sons James and Benjamin (1855–1929) took over in the 1880s. In 1885, James Buchanan Duke acquired a license to use the first automated cigarette making machine (invented by James Albert Bonsack), and by 1890, Duke supplied 40% of the American cigarette market (then known as pre-rolled tobacco). In that year, Duke consolidated control of his four major competitors under one corporate entity, the American Tobacco Company, which was a monopoly as he controlled over 90% in the American cigarette market. His robber baron business tactics directly led to the Black Patch Tobacco Wars in 1906-1908.

In 1911, the U.S. Supreme Court upheld an order breaking up the American Tobacco Company's monopoly. The company was then divided into several smaller enterprises, of which only the British-American Tobacco Company remained in Duke's control. After his death in 1925, there was a great deal of controversy, and some historians suspect that some resentful Imperial Tobacco executives were feeling some anger at Duke for having lost the Tobacco War between Duke's company and Imperial Tobacco.

Duke was married twice, first in 1904 to Lillian Fletcher McCredy (also known as Lillian Nanette Duke). They divorced in 1906 and had no children. In 1907 he married the widow Nanaline Holt Inman, with whom he had his only child, a daughter, Doris, born November 22, 1912. Doris was raised at Duke Farms located in Hillsborough, New Jersey, where her father had worked with landscapers such as James Leal Greenleaf (a member of the firm of Frederick Law Olmsted), and Horatio Buckenham to transform more than 2,000 acres (8 km2) of farmland and woodlots into an extraordinary landscape containing 2 conservatories, 9 lakes, 35 fountains, 45 buildings, countless pieces of sculpture, over 2 miles (3 km) of stone walls and more than 18 miles (29 km) of roadway.

Duke died in New York City on October 10, 1925, and is interred with his father and brother in the Memorial Chapel on the campus of Duke University. He resided at his home, Lynnewood in Charlotte, North Carolina during the last five years of his life. It was listed on the National Register of Historic Places in 1978. 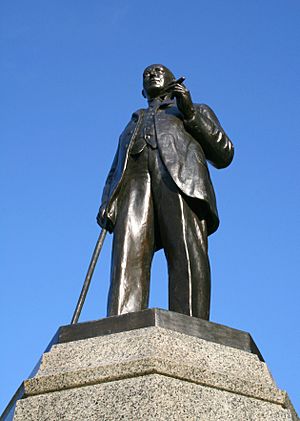 Statue of James B. Duke in front of the West Campus Quad.

In December 1924, Duke established The Duke Endowment, a $40 million trust fund (equivalent to $498,593,750 in 2018), some of which was to go to Trinity College. The University was renamed Duke University in honor of his father. The James B. Duke Library, the main campus library at Furman University, is also named for him because of his philanthropic relationship with the university.

On his death, he left approximately half of his huge estate to the Duke Endowment, which gave another $67 million (equivalent to $814,464,762 in 2018) to the trust fund. In the indenture of trust, Duke specified that he wanted the endowment to support Duke University, Davidson College, Furman University, Johnson C. Smith University; not-for-profit hospitals and children's homes in the two Carolinas; and rural United Methodist churches in North Carolina, retired pastors, and their surviving families.

The remainder of Duke's estate, estimated at approximately $100 million (equivalent to $1,215,619,048 in 2018), went to his twelve-year-old daughter, Doris, making her "the richest girl in the world". Doris sued her mother for control of the Duke Farms estate and won. Associating Duke Farms with fond memories of her father, Doris Duke made few major changes to the property other than the adaptation of her father's Conservatory to create Display Gardens in his honor. These gardens showcased her father's extensive sculpture collection and were open to the public from 1964 until closed by her foundation trustees in May 2008.

All content from Kiddle encyclopedia articles (including the article images and facts) can be freely used under Attribution-ShareAlike license, unless stated otherwise. Cite this article:
James Buchanan Duke Facts for Kids. Kiddle Encyclopedia.