Hillsborough Township was originally created by Royal charter issued May 31, 1771, which was revoked and revised on September 12, 1771. It was incorporated on February 21, 1798 by the New Jersey Legislature Township Act of 1798 as one of New Jersey's original group of 104 townships. Portions of the township were taken to form the boroughs of Millstone (May 14, 1894) and Manville (April 1, 1929). The township's name may have come from an earlier name of "Hillsbury", though it may have been named for Wills Hill, 1st Marquess of Downshire who was the Earl of Hillsborough.

On May 31, 1771, Hillsborough was officially granted a Charter incorporating it as a Township. A revised charter was issued on September 12, 1771. The records of Hillsborough Township are complete from their inception in 1746 and there are ten volumes, each some several hundred pages, kept in the Special Collections Department of the Rutgers University Library along with the Charter.

Hillsborough Township quickly took its place in history as the path General George Washington and his troops traveled from the Battle of Princeton to winter quarters in Morristown. While the British were encamped in the valley below awaiting an opportunity to attack, it is said that Washington drilled his troops on the Sourland Mountain around a spring near the top using different formations and corn stalks for guns. As the sun caught the stalks, the British thought Washington had received reinforcements and fresh supplies. The British troops, thinking that they were outnumbered, slipped off to New Brunswick leaving Washington to continue to Morristown.

The township was formally incorporated on February 21, 1798.

Hillsborough is the home of the Belle Mead GSA depot, or Belle Mead General Depot, which was a storage site for materials during World War II, along with housing Italian and German prisoners of war. It continued storing materials until the 1980s, and various contaminants have leaked into the ground and surrounding area during that time. Efforts are under way to convert the site into a mixed recreation and R&D complex.

Hillsborough is home to Duke Gardens and Duke Farms, a 2,700 acres (11 km2) estate in the north-eastern quadrant of the town that was originally owned by tobacco and electric energy tycoon James "Buck" Duke and then passed down to daughter Doris Duke, and is now one of the few remaining "preserved" natural areas in Hillsborough Township.

Unincorporated communities, localities and place names located partially or completely within the township include Amwell,

After the three and three quarter mile U.S. Route 206 Bypass is completed, the town plans to design a town center along the old Business Route 206. Construction for the bypass began in 2010 and is expected to be completed by 2017, with the old section of US-206 intended to become "main street" for the township and be zoned for commercial and residential use. 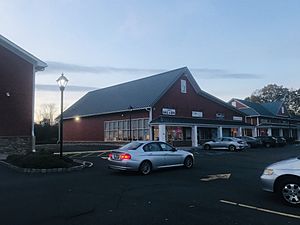 There were 13,573 households out of which 40.3% had children under the age of 18 living with them, 65.7% were married couples living together, 8.3% had a female householder with no husband present, and 23.2% were non-families. 19.0% of all households were made up of individuals, and 6.3% had someone living alone who was 65 years of age or older. The average household size was 2.81 and the average family size was 3.25. 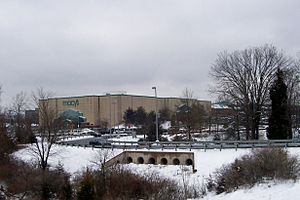 Super-regional shopping mall Bridgewater Commons is located in bordering Bridgewater. It is a major shopping destination for Hillsborough residents.

U.S. Route 206 is the main road that passes through the township. A new alignment of US 206, the 1.66-mile (2.67 km) US 206 Bypass, was completed through Hillsborough in 2015 to bypass the congested stretch of the road. The road is named for Peter J. Biondi, a former Hillsborough mayor and member of the General Assembly.

Main county roads that pass through are CR 514 which runs for 10.24 miles (16.48 km) through the township, and CR 533. Interstate 287 is outside the municipality in bordering Bridgewater and Franklin Townships. Part of the proposed routing of Interstate 95 through central New Jersey included Hillsborough; this project was ultimately canceled in the 1980s.

NJ Transit has proposed a new West Trenton Line that would stretch for 27 miles (43 km) from the West Trenton station in Ewing Township to a connection with the Raritan Valley Line at Bridgewater Township, and from there to Newark Penn Station in Newark. The plan would include stations at both Belle Mead and Hillsborough.

People who were born in, residents of, or otherwise closely associated with Hillsborough Township include:

All content from Kiddle encyclopedia articles (including the article images and facts) can be freely used under Attribution-ShareAlike license, unless stated otherwise. Cite this article:
Hillsborough Township, New Jersey Facts for Kids. Kiddle Encyclopedia.