Manville is a borough in Somerset County, New Jersey, United States. As of the 2010 United States Census, the borough's population was 10,344, reflecting an increase of one person (+0.0%) from the 10,343 counted in the 2000 Census, which had in turn declined by 224 (-2.1%) from the 10,567 counted in the 1990 Census. Manville was named after the Johns-Manville Corporation, which maintained a large manufacturing facility in the borough for decades.

Historically, many of Manville's residents are of Slavic — mostly eastern Polish (23.1% of the borough's population in 2000) and western Ukrainian descent — with many businesses and restaurants geared towards the Polish-American community located along Main Street (County Route 533).

Manville was formed by an act of the New Jersey Legislature on April 1, 1929, subject to the results of a referendum held on April 18, 1929.

Unincorporated communities, localities and place names located partially or completely within the borough include Millsboro.

Much of Manville is in a low-lying flood plain and is surrounded by rivers and streams on all but the western side which borders neighboring Hillsborough Township by land. The Raritan River forms the northern boundary of the borough and is met by the Millstone River which forms the eastern boundary of the borough, where a weir exists at the confluence of the rivers which is used for water intake purposes by New Jersey American Water. 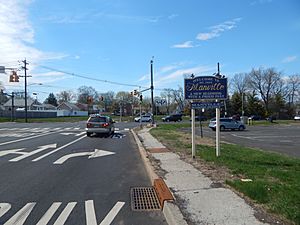 23.1% of Manville's residents identified themselves as being of Polish ancestry, the second-highest in New Jersey (behind Wallington's 45.5%), for all places with 1,000 people listing their ancestry.

There were 4,115 households out of which 26.5% had children under the age of 18 living with them, 50.3% were married couples living together, 11.9% had a female householder with no husband present, and 33.0% were non-families. 26.7% of all households were made up of individuals and 12.3% had someone living alone who was 65 years of age or older. The average household size was 2.51 and the average family size was 3.05.

Somerset County provides SCOOT bus service in the borough on its R1, R2 and Peak routes.

Johns-Manville Corporation had a large manufacturing facility in the borough that utilized asbestos in its manufacturing processes. Manville has begun to leave behind its industrial past and the lingering asbestos pollution that was a legacy of the manufacturing that took place in the borough. The asbestos dumps have been removed or capped in compliance with environmental laws, and the former manufacturing land has been redeveloped into a large movie theater complex known as Reading Cinemas, a medium-sized retail outlet with a Walmart anchor store and a used car wholesale auction company called ADESA New Jersey.

Other areas of the borough are also undergoing redevelopment. The Federal Superfund project called The Federal Creosote Site was cleaned up by the United States Environmental Protection Agency (EPA) with $250 Million of public funds. The Superfund cleanup project was performed in a 35-acre (140,000 m2) residential section of town called Claremont Development and in a 15-acre (61,000 m2) commercial area called the Rustic Mall, and was officially declared complete by the EPA on March 7, 2008. As of 2014, the borough has no plans to redevelop the former Superfund site. 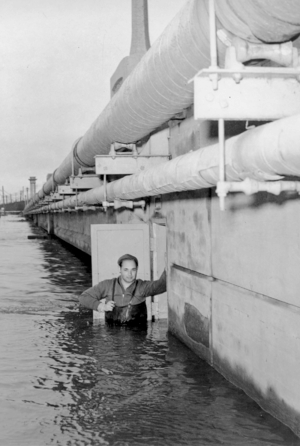 Gauge inspector and the Manville gage house built into the Van Veghten's Bridge abutment during the Raritan River flood of December 31, 1948

Manville suffers from occasional flooding events that occur after prolonged heavy rainfall events, when the Raritan River and Millstone River overflow their banks into the northern section (Raritan) and the Lost Valley section (Millstone) of the borough. The southern parts of Main Street also suffer from the flooding, due to the presence of Royce Brook which backs up with water from the nearby Millstone River in which it empties.

Manville was severely hit by a flood in the wake of Hurricane Floyd in September 1999, which dropped 10 to 12 inches (250 to 300 mm) of rain in the areas surrounding the borough. The floods devastated the Lost Valley section, some of the South side area along Main Street and a large portion of the North side. Water levels reached between 12 feet (3.7 m) and 17 feet (5.2 m) in parts of the borough on September 17, 1999. The only way residents could get help was by boat or helicopter. There was also a large amount of fuel oil floating on the flood water which further damaged homes, many of which came off their foundations.

A portion of the north side received water coming from the Raritan at Dukes Parkway. Much of the north side had no flooding. The water reached the freight tracks at Main Street, and spilled over, flooding some on the South Street side, but leaving tons of water dammed in on the North Street side, where people had to be rescued from rooftops, or second floor windows and landings, by boat.

The problem was doubled in the Lost Valley section, as flood waters backed up where the Raritan and Millstone rivers meet near the dam. All trapped and injured people had to be taken out by helicopter, as there was no way to get in or out of the Lost Valley section. The September 1999 flood disaster was the worst ever to hit Manville, although it had been flooded in 1971 during Tropical Storm Doria, when many of the Lost Valley houses were destroyed and their foundations lost, and previously before that in the 1950s. Because of the railroad tracks being so much higher than the Lost Valley land, Manville's Lost Valley will always be a number one target for flooding. Through research of Manville's history, Lost Valley was to remain open land due to the high risk of flood.

Manville has the distinction of being the location where the Raritan River (which passes to the north) and the tributary Millstone River (which passes to the east) join together, in the far northeastern corner of the borough. The Lost Valley section in eastern Manville is situated on the natural flood plain between the Raritan and Millstone Rivers, and bears the brunt of occasional flooding events which affect the river basins. The Lost Valley section is named so because it is generally disconnected from the rest of the borough with only a tunnel at Kyle Street and a bridge at Bridge Street crossing the railroad tracks to the neighborhood. Hurricane Floyd in September 1999 produced a particularly severe flood (a record for the river basins) in Manville, especially in the Lost Valley section of the borough, which experienced flooding all the way to the railroad tracks, with twelve feet or more water on many properties, which inundated houses with damaging flood waters. Another severe and devastating flood event occurred in Lost Valley during the April 2007 Nor'easter. It also left many homes and businesses underwater and was the worst flood since Hurricane Floyd. Flooding problems once again occurred in Manville on March 14, 2010, with rivers running already high due to recent snow melt along with three to four inches (102 mm) of rain that fell on the area on March 13, flooding was inevitable. More extensive flooding affected Manville in August 2011 when Hurricane Irene passed through New Jersey. In the aftermath of Hurricane Sandy in late October 2012, Manville did not flood but the powerful winds left many homes without power for several days.

All content from Kiddle encyclopedia articles (including the article images and facts) can be freely used under Attribution-ShareAlike license, unless stated otherwise. Cite this article:
Manville, New Jersey Facts for Kids. Kiddle Encyclopedia.