Belle Mead is an unincorporated community and census-designated place (CDP) located within Montgomery Township, in Somerset County, New Jersey, United States. As of the 2010 United States Census, the CDP's population was 216. 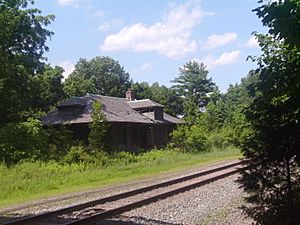 Up until about 1875, Belle Mead, then named Plainville, was considered to be part of the community of Harlingen. It was a quiet farming region when about that time a New York City contractor named Van Aken bought up all the local farms and set out to develop a city. He had the farms laid out into lots, some streets put through and named after the style of New York. He donated land for the railroad station that had a dining room underneath (the station was torn down in February, 1940). There is an abandoned train station in Belle Mead. When Van Aken went broke, the property was sold to a U.S. Senator, John R. McPherson, who changed the name from Vanaken to Belle Mead in honor of his daughter, Edna Belle Mead McPherson, according to one popular story.

Woods Tavern in Belle Mead was a popular stop for travelers for more than 100 years and played an important social and political role. Horace Greeley spoke there in 1872 as part of his campaign for President of the United States. The tavern burned down in 1932.

Dr. John Summerskill and his wife, Mimi LaFollette Summerskill established the LaFollette Vineyard in Belle Mead in the 1970s. President Bill Clinton and 14 Democratic governors met for a strategy session and press conference at the vineyard during the 1992 presidential campaign.

The abandoned train station was built by Reading Railroad in the 1930s, and was removed from service in 1984. Since then, restoration projects have been announced, however, not one has progressed any further than cleaning up tree debris and graffiti.

According to the United States Census Bureau, Belle Mead had a total area of 0.740 square miles (1.917 km2), all of which is land.

There were 78 households out of which 39.7% had children under the age of 18 living with them, 71.8% were married couples living together, 5.1% had a female householder with no husband present, and 20.5% were non-families. 15.4% of all households were made up of individuals, and 7.7% had someone living alone who was 65 years of age or older. The average household size was 2.77 and the average family size was 3.03.

People who were born in, residents of, or otherwise closely associated with Belle Mead include:

All content from Kiddle encyclopedia articles (including the article images and facts) can be freely used under Attribution-ShareAlike license, unless stated otherwise. Cite this article:
Belle Mead, New Jersey Facts for Kids. Kiddle Encyclopedia.