Montgomery Township was incorporated on February 21, 1798, as one of New Jersey's initial group of 104 townships by an act of the New Jersey Legislature, from what remained of Western precinct. Portions of the township were taken to form Princeton Borough (February 11, 1813, in Mercer County, consolidated to form Princeton as of January 1, 2013), Princeton Township (April 9, 1838, also now consolidated into Princeton) and Rocky Hill (December 18, 1889).

The township has been one of the state's highest-income communities. Based on data from the American Community Survey for 2013–2017, Montgomery Township residents had a median household income of $180,660, ranked 2nd in the state among municipalities with more than 10,000 residents, more than double the statewide median of $76,475.

The first European landowners in what was to become Montgomery Township, such as Johannas Van Home and Peter Sonmans, were speculators who did not live on the land, but sold large parts of what they owned to companies that subdivided it into farm-sized plots for those who did intend to settle. Many speculators and early settlers were of Dutch descent from the New Amsterdam area (especially Long Island), which, after the British ousted the Dutch (1664), was renamed New York in honor of the Duke of York (the future James II). The Township was originally known as the Western Precinct of Somerset County (i.e. west of the Millstone River). Before the creation of Mercer County in 1838, the southern border extended to Nassau Street in Princeton. In 1798 the Western Precinct was organized as Montgomery Township, named for Colonel Richard Montgomery, who fell fighting for the patriot cause in the Battle of Quebec at the start of the Revolution (1775).

Most of the land is flat and fertile, running westward from the Millstone River to Province Line, which divides Somerset from Hunterdon County and once marked the division between East and West Jersey. Farms of 300 to 500 acres (2.0 km2) were common, some owners keeping a few slaves to work the land and serve in the household. The aim of the early settlers was to produce as many of the necessities of life as they could: subsistence farming, in other words. Each farm had a vegetable garden, orchard, pasturage and fields for grain, as well as a stand of timber to be selectively cut for fuel. What became known as the Harlingen Tract (1710) included part of Sourland Mountain. Each farm on the flatland was assigned a separate strip of woodland that ran up to the Hunterdon border, all crossing Rock Brook. At points along the stream mills were built either to saw lumber or to grind grain. Other early mill sites were at Rocky Hill on the Millstone River, Bridgepoint on Pike Brook and on Bedens Brook near Blawenburg.

Settlement began in the first quarter of the eighteenth century. When churches, schools, general stores, blacksmith shops and hotel/taverns were built, they tended to cluster at intersections or other important points. For example, the intersection where the Carrier Clinic now stands used to be called Plainville or Posttown, having in the nineteenth century a post office, store, school house, blacksmith and wheelwright shops, as well as a hotel/tavern where the circuit judge presided. Most people walked to where they wanted to go. Schools were generally spaced no further than four miles (6 km) apart in order that no child would have to go more than two miles (3 km) to get to one. Churches marked the most important centers. The Dutch Church's earliest congregations first gathered in farm houses. The first church building at Harlingen dates to around 1750 and was called the Church at Sourland. The church at Neshanic in Hillsborough Township was established in 1752. In the early years these two churches shared a single pastor, and up to about 1800 they conducted their services in the Dutch language. One such pastor was Martinus Van Harlingen, who gave his name to the village, to the church that now bears his name, and to the local Historical Society. The Blawenburg church, an offshoot of the one at Harlingen, dates to 1830 and was erected in three days.

During the Revolution, the Township was the scene of marches by both British and patriot forces and of clashes between them. In the century that followed the movement of goods and people was accelerated by increasingly swifter forms of transportation. First was the building of the Georgetown and Franklin Turnpike between Lambertville and New Brunswick (1820-22: Route 518). Next came the digging of the Delaware and Raritan Canal along the east side of the Millstone River (1834). Railroad construction followed with the Delaware and Boundbrook Railroad (later the Reading), which established depots at Skillman, Harlingen and Belle Mead (1875). In the early years of the twentieth century, the arrival of the automobile, of electricity and of the telephone brought further growth and change. In consequence, and over time, the one or two room schoolhouse was supplanted by the central school, post offices were consolidated and most of the hotels/taverns disappeared. The crossroad hamlets that once offered basic services of general store, blacksmith shops and the like disappeared also, many leaving only their names to mark a road or an area: Skillman, Bridgepoint and Dutchtown are examples.

The paving and realignment of roads, and the building of new ones, came toward the end of the transportation revolution. A new major north-south highway, Route 206, was created in 1927. Before that time Montgomery and Mount Lucas Roads were parts of the chief north-south route through the center of the Township. Farming continued despite many changes in the economy and in agricultural practices. In the late nineteenth century subsistence farming was giving way to specialized operations, such as dairying, poultry farming, and fruit orchards. As the twentieth century drew to a close even these ventures no longer offered the farmer an easy existence, given the rapidly appreciating value of the land, over against the low prices of products produced on it. As farms became less and less profitable, the land was converted to other uses. For example, in 1898 the facility for the treatment of epileptics was built on farmland between Blawenburg and Skillman. Since the Second World War, housing developments, shopping centers and business parks have sprung up, leaving as remnants of the long tradition of agriculture in Montgomery roadside stands, riding stables and the like.

As rapid growth throughout the Princeton area has spread suburban sprawl across the Township, the push to limit runaway development and to acquire open space has become an urgent concern of the community. In the last decade of the twentieth century, Montgomery's population nearly doubled, making it the fastest growing township in the county.

Belle Mead (with a 2010 Census population of 216), Blawenburg (280), Harlingen (297) and Skillman (242) are unincorporated communities and census-designated places (CDPs) located within Montgomery Township.

There were 7,635 households out of which 48.5% had children under the age of 18 living with them, 70.9% were married couples living together, 6.7% had a female householder with no husband present, and 20.4% were non-families. 17.7% of all households were made up of individuals, and 7.2% had someone living alone who was 65 years of age or older. The average household size was 2.90 and the average family size was 3.31.

There were 5,803 households, out of which 51.1% had children under the age of 18 living with them, 75.5% were married couples living together, 5.3% had a female householder with no husband present, and 17.6% were non-families. 14.2% of all households were made up of individuals, and 3.5% had someone living alone who was 65 years of age or older. The average household size was 2.99 and the average family size was 3.33.

In 2007, the Township of Montgomery purchased a 256-acre (1.04 km2) parcel of land once known as the North Princeton Developmental Center from the State of New Jersey, located in Montgomery adjoining Skillman Road and Burnt Hill Road. In addition, the Township acquired from the State the adjacent wastewater treatment facility on 7 acres (28,000 m2), behind the State-owned Skillman Dairy Farm. The NPDC property, originally established in 1898 as the "New Jersey State Village for Epileptics," operated as a self-contained community that consisted of hospitals, housing, maintenance areas, schools, a power plant, a wastewater treatment facility and an on-site landfill. Later, it became the New Jersey Neuropsychiatric Institute. Most recently, and until 1998, the property was the New Jersey Department of Human Services' psychiatric care facility "North Princeton Developmental Center".

For years there were over 100 buildings on the Property, mostly in substandard, unsafe, unsanitary, dilapidated and/or obsolescent condition. Ninety-two of these buildings were abated and demolished summer 2007. The remaining handful of buildings have been boarded up in anticipation of possible reuse as part of redevelopment. Efforts are ongoing to remediate environmental conditions at the site and repair or demolish the dam and restore the lake. The property's environmental contamination must be remediated and brought into compliance with applicable laws and regulations.

The original plan for the land was development, as advocated by then mayor Louise Wilson. The Township prepared a redevelopment plan and solicited redevelopment proposals for a "Town Square" concept which would have created hundreds of new residential and commercial units. However, no developers submitted bids.

Throughout the rest of 2008 and all of the next few years, the debate over Skillman Village changed. The local Republican team led by Kacey Dyer and Mark Caliguire proposed selling all of the land to Somerset County to create a passive-use park. The public support of this idea was overwhelming, causing it to be one of the deciding factors of the 2008, 2009, and 2010 elections. Louise Wilson and her team were voted out of office (the Republicans took complete control of the Township Committee with the election of Ed Trzaska and Patricia Graham on November 2, 2010).

In October 2010, Somerset County agreed to purchase the land for a passive-use park for $14.1 million. 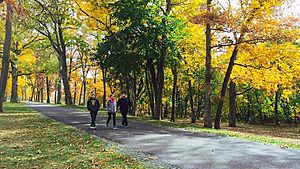 Skillman Park is an area of open space in the Skillman section of Montgomery Township which is owned by Somerset County and maintained by the Somerset County Parks Department. In April 2015 a ribbon cutting ceremony was held by County officials to celebrate the park's opening. County crews and contractors have created a new look and amenities at the passive recreation-focused park, on lands which have been restored from a variety of former uses.

A 2.2-mile (3.5 km), 12-foot-wide, paved multi-use loop trail has been built along much of the former facility's road and driveway network. New fencing, sign-age and landscaping have been installed at the park entrances. Much of the tree-lined road layout, designed by landscape architect and engineer Charles W. Leavitt in 1901, has been preserved. Old paving was removed so that the center of Larocque Circle will be open lawn with a small parking area. Main Boulevard has been repaved and parking has been added or improved in four locations.

Princeton Airport is located in the township.

Montgomery Township was one of the fastest growing school districts in New Jersey. In September 1992, the K-12 enrollment was 1,590 compared to 4,924 in September 2005. This represents a tripling of enrollment in 13 years. However, since the 2005–06 school year, enrollment has been flat due to a dramatic slowing of residential development in town.

Montgomery Township High School was the 33rd-ranked public high school in New Jersey out of 339 schools statewide in New Jersey Monthly magazine's September 2014 cover story on the state's "Education 2014: The State of Our Schools" after being ranked 61st in 2012 out of 328 schools listed and 10th in 2010 out of 322 schools listed.

Rocky Hill had been a non-operating school district whose school children attended the Montgomery Township schools as part of a sending/receiving relationship. It has since been consolidated into the Montgomery district.

People who were born in, residents of, or otherwise closely associated with Montgomery Township include:

All content from Kiddle encyclopedia articles (including the article images and facts) can be freely used under Attribution-ShareAlike license, unless stated otherwise. Cite this article:
Montgomery Township, New Jersey Facts for Kids. Kiddle Encyclopedia.