Sourland Mountain is a 17 miles (27 km) long ridge in central New Jersey, extending from the Delaware River at Lambertville to the western end of Hillsborough Township near the community of Neshanic, through Montgomery Township and into Hopewell Township in Mercer County. It comprises the largest contiguous forest in Central Jersey, nearly 90 square miles (233 km2) in area. The highest point is only 568 feet (173 m) above sea level, but the way it rises steeply from the surrounding farmland has earned it the title of 'mountain'. The ridge itself sits within a larger area of rough terrain called The Sourlands.

The origin of the name Sourland is unclear and a few theories exist. It could be derived from the term “sorrel-land” which describes the sorrel (reddish-brown) colored shale-bearing soils encountered by the pioneering German farmers, or German immigrants from the Sauerland region simply anglicized the name of their home region. Another possible source for the name is from 17th century Dutch settlers who referred to the region as "sauer landt" because the region was clearly not suitable for farming. To this day, the area remains relatively undeveloped - besides being unsuitable for farming, the hard igneous rock, nonporous clay soils, steep slopes and perched wetlands create groundwater conditions which make the area difficult for drilling wells and installing septic systems. 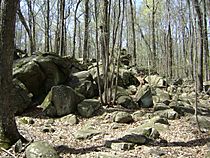 Early farmers had to contend with the mountain's boulder strewn slopes.

Before the arrival of Europeans, Sourland Mountain was inhabited by Unami speaking Lenape, in particular the Musconetcongs. However, settlements and farms along the mountain seem to have been restricted to river valleys due to the poor, rocky soils upslope. There is evidence indicating the Delaware River likely supported at least one such Lenape settlement at the southern foot of the mountain around present-day Lambertville, New Jersey.

In the 18th and 19th century, the mountain's many streams were heavily exploited as an energy source for various mills. At the same time, Sourland Mountain became a valuable source of lumber. However, by the time of the Civil War, most of the forests that had previously covered the mountain had been depleted. In place of these forests, farms sprang up along the more easily managed parts of the mountain, and rural villages were formed. Rock quarries and a local pottery industry were also started around this time.

By the end of the 19th century, Sourland Mountain supported a thriving peach farming industry. But a blight just before the start of the new century, as well as a statewide shift to an industrial economy, eventually crippled agriculture on the mountain. Rural villages soon disappeared, and new forests began to grow over abandoned farmland. The only pre-20th century industry that was able to survive into the modern era was rock quarrying –the mountain's trap rock was crushed and used to build railroad beds and roads throughout the region.

For the first half of the 20th century, Sourland Mountain remained a remote part of New Jersey, with few connections to nearby metropolitan areas. This changed in the 1940s when new road construction made the mountain more accessible, allowing suburbia to begin invading its valleys and slopes. Today the mountain acts as a watershed for surrounding communities, while at the same time providing recreational opportunities to Central New Jersey. 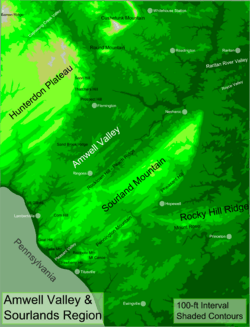 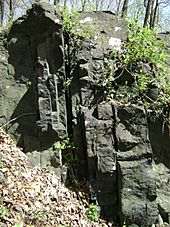 Hornfels is common on Sourland Mountain due to the extensive baking of local rock that occurred as a result of igneous intrusions.

Sourland Mountain was formed 200 million years ago by a plutonic intrusion of a hard igneous rock, diabase, into the Brunswick Shale. The intrusion occurred as tectonic forces created the Newark Basin, a prehistoric rift valley active near the rift which ultimately spread North America and Africa apart. The parallel ridges of the mountain were probably formed by magma seeping up through linear faults created during the rifting process

During the early Jurassic the rift which formed the Newark Basin failed, and the intrusion which would eventually become Sourland Mountain ceased growing. Initially, the vast majority of volcanic material remained within the crust. However, the diabase and related hornfels which form the backbone of the mountain are a type of highly erosion resistant stone known as trap rock. Consequently, millions of years of erosion lowered the more easily worked shale surrounding the intrusion, turning it into the elevated ridges which currently comprise Sourland Mountain.

One of the key differences between Sourland Mountain and the other volcanic mountains of the Newark Basin, including the Watchungs and the Palisades, is that it has not been touched by glaciers. This has left the mountain with a mantle of Triassic argillite, which covers much of the underlying trap rock and comprises the bulk of Pheasant Hill. The impermeability of argillite is primarily to blame for Sourland Mountain's extremely poor aquifer. 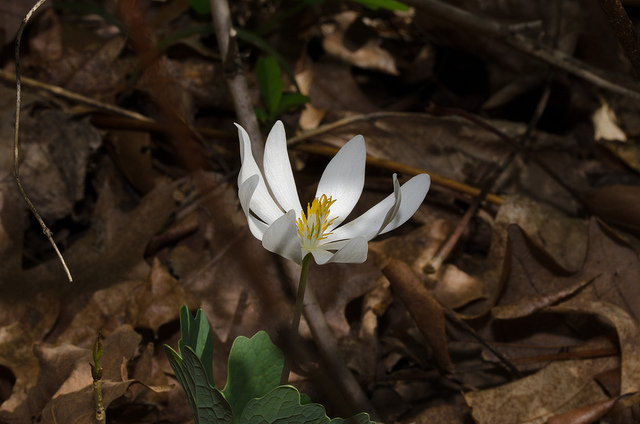 The Sourlands serve as a stopover area for migratory birds that travel between South and Central America and the Arctic as well as forest birds migrating between Washington, D.C., and Boston. The area also supports a large population of deep-woods birds such as scarlet tanagers and barred owls.

Being the largest contiguous forest between the Pine Barrens and the New Jersey Highlands, it is critical to the survival of neotropical migrant birds and other rare species of plants and animals. D&R Greenway Land Trust's partner in Mexico, Amigos de Calakmul, protects bird habitat at the southern end of the migratory flyway.

All content from Kiddle encyclopedia articles (including the article images and facts) can be freely used under Attribution-ShareAlike license, unless stated otherwise. Cite this article:
Sourland Mountain Facts for Kids. Kiddle Encyclopedia.