Flemington is a borough in Hunterdon County, New Jersey, United States. It is the county seat of Hunterdon County. As of the 2010 United States Census, the borough's population was 4,581, reflecting an increase of 381 (+9.1%) from the 4,200 counted in the 2000 Census, which had in turn increased by 153 (+3.8%) from the 4,047 counted in the 1990 Census. Most of the borough is located in the Amwell Valley (a low-lying area of the Newark Basin) and the Raritan Valley (the South Branch of the Raritan River flows through the center of the borough). Northwestern portions of the borough sit on the Hunterdon Plateau.

Flemington is an independent municipality completely surrounded by Raritan Township and is located near the geographic center of the township. 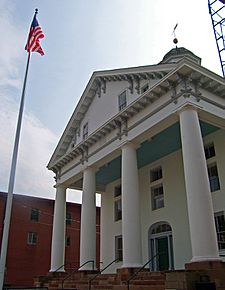 The Hunterdon County Courthouse, where Bruno Hauptmann was tried.

Before European settlement, the land that comprises Flemington, as was all of Hunterdon County, was the territory of the Lenni Lenape Native Americans. In 1712, as part of a land parcel of 9,170 acres (37.1 km2), the Flemington area was acquired by William Penn and Daniel Coxe.

The surrounding fertile farmland dictated that the beginnings of Flemington were agricultural. Early German and English settlers engaged in industries dependent on farm products. As time passed poultry and dairy farms superseded crops in agricultural importance. An example of early settlement families was Johann David and Anna Maria Ephland, who emigrated in 1709 from Germany through London to New York and settled on his 147.5-acre (0.597 km2) farm in 1717. They raised their seven children, and two from his previous marriage, on the farm that now makes up the core of Flemington.

In 1785, Flemington was chosen as the County Seat of Hunterdon. Fire destroyed the old courthouse in 1826 and the City of Lambertville made an ultimately unsuccessful attempt to have the seat relocated there. Flemington remained the County Seat and the Courthouse which stands today on Main Street was built.

In 1856, the Hunterdon County Agricultural society purchased 40 acres (16 ha) of land that would accommodate the people, exhibits and livestock for the County (Flemington) Fair. The purpose of this Fair was to promote competition between farmers, stock raisers and machinery manufacturers. The fair was held every year at the Flemington Fairgrounds which also was the site of Flemington Fair Speedway (later Flemington Raceway). From 1992 through 1995, the speedway hosted the Race of Champions, a race for modified racers. The speedway hosted a NASCAR Craftsman Truck Series race from 1995 to 1998. In 2003, the County Fair adopted a new name, The Hunterdon County 4-H and Agricultural Fair, and moved to the South County Park in East Amwell Township.

According to the United States Census Bureau, the borough had a total area of 1.077 square miles (2.790 km2), all of which was land.

Flemington is completely surrounded by Raritan Township, making it part one of 21 pairs of "doughnut towns" in the state, where one municipality entirely surrounds another.

Flemington Circle is the largest of three traffic circles in the environs of Flemington and sits just to the southeast of Flemington's historic downtown. U.S. Route 202 and New Jersey Route 31 approach the circle separately from the north and continue south concurrently, and the circle is the eastern terminus of Route 12. It is one of only a handful of New Jersey's once-widespread traffic circles still extant according to its original design. The circle sees significant congestion on weekends because of the new developments and big-box retailers. Unlike most circles, traffic on US 202 does not yield on entry; US 202, being a main four-lane divided highway, gets the right of way.

Students in public school for pre-kindergarten through eighth grade attend the Flemington-Raritan Regional School District, which also serves children from the neighboring community of Raritan Township. As of the 2018–19 school year, the district, comprised of six schools, had an enrollment of 3,079 students and 327.8 classroom teachers (on an FTE basis), for a student–teacher ratio of 9.4:1. The district consists of four K - 4 elementary schools, one intermediate school for grades 5 and 6 and a middle school for grades 7 and 8. Schools in the district (with 2018–19 enrollment data from the National Center for Education Statistics) are Barley Sheaf School (350 students; in grades K-4, located in Flemington), Copper Hill School (413; PreK-4, Ringoes), Francis A. Desmares School (447; K-4, Flemington), Robert Hunter School (388; K-4, Flemington), Reading-Fleming Intermediate School (682; 5-6, Flemington) and J. P. Case Middle School (781; 7-8, Flemington). Flemington is allocated two of the nine seats on the regional district's board of education.

Public school students in ninth through twelfth grades attend Hunterdon Central Regional High School, part of the Hunterdon Central Regional High School District, which serves students in central Hunterdon County from Flemington and from Delaware Township, East Amwell Township, Raritan Township and Readington Township. As of the 2018–19 school year, the high school had an enrollment of 2,844 students and 238.8 classroom teachers (on an FTE basis), for a student–teacher ratio of 11.9:1. Seats on the high school district's nine-member board of education are allocated based in the population of the five constituent municipalities who participate in the school district, with one seat allocated to Flemington.

People who were born in, residents of, or otherwise closely associated with Flemington include:

All content from Kiddle encyclopedia articles (including the article images and facts) can be freely used under Attribution-ShareAlike license, unless stated otherwise. Cite this article:
Flemington, New Jersey Facts for Kids. Kiddle Encyclopedia.