When the Clinton post office was established in 1829, it was named for DeWitt Clinton, Governor of New York and the primary impetus behind the then-newly completed Erie Canal.

Clinton was incorporated as a town by an act of the New Jersey Legislature on April 5, 1865, within portions of Clinton, Franklin and Union Townships. Clinton gained full independence from its three parent townships in 1895.

The town is perhaps best known for its two mills which sit on opposite banks of the South Branch Raritan River. The Red Mill, with its historic village, dates back to 1810 with the development of a mill for wool processing. Across the river sits the Stone Mill, home of the Hunterdon Art Museum for Contemporary Craft and Design, located in a former gristmill that had been reconstructed in 1836 and operated continuously until 1936. In 1952, a group of local residents conceived of a plan to convert the historic building into an art museum, which is still in operation today.

Clinton is considered an exurb of New York City, as Hunterdon County lies on the western fringe of the New York City Metropolitan Area, which is mainly rural with scattered housing developments and old farm homes. Clinton is part of the Primary Metropolitan Statistical Area of Middlesex, Somerset and Hunterdon counties in New Jersey. It serves as a "bedroom community" for many commuters working in and around Northern New Jersey and New York City, often younger residents who have supplanted long-time residents of Clinton. 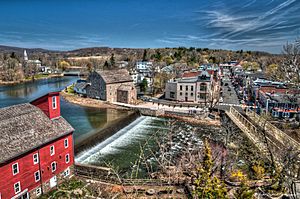 Clinton falls under the 'Northern New Jersey' climate zone. According to the Office of the New Jersey State Climatologist at Rutgers University, the Northern climate zone covers about one-quarter of New Jersey and consists mainly of elevated highlands and valleys which are part of the Appalachian Uplands. Surrounded by land, this region can be characterized as having a continental climate with minimal influence from the Atlantic Ocean, except when the winds contain an easterly component. Prevailing winds are from the southwest in summer and from the northwest in winter. Being in the northernmost portion of the state, and with small mountains up to 1,800 feet (550 m) in elevation, the Northern Zone normally exhibits a colder temperature regime than other climate regions of the State of New Jersey. This difference is most dramatic in winter when average temperatures in the Northern Zone can be more than ten degrees Fahrenheit cooler than in the Coastal Zone. Annual snowfall averages 40 to 50 inches (1,300 mm) in the northern zone as compared with an average of 10-15 inches in the extreme south.

Clinton falls under the USDA 6b Plant Hardiness zone.

There were 1,057 households out of which 37.0% had children under the age of 18 living with them, 55.2% were married couples living together, 9.7% had a female householder with no husband present, and 31.2% were non-families. 25.4% of all households were made up of individuals, and 8.8% had someone living alone who was 65 years of age or older. The average household size was 2.57 and the average family size was 3.14.

There were 1,068 households out of which 35.4% had children under the age of 18 living with them, 55.3% were married couples living together, 8.9% had a female householder with no husband present, and 32.2% were non-families. 26.3% of all households were made up of individuals and 7.1% had someone living alone who was 65 years of age or older. The average household size was 2.46 and the average family size was 3.00.

The Town of Clinton is situated off Route 31, which is in turn off of Interstate 78/U.S. Route 22 via Exits 16 and 17. Route 173 and County Road 513 run through the center of town. Convenient access to Interstate 78 provides Clinton with a convenient route to and from New York City and the Lehigh Valley in Pennsylvania. Philadelphia can also be easily accessed from Clinton via New Jersey Route 31 to Interstate 95 South.

Trans-Bridge Lines offers buses on a route that provides service from Allentown and Bethlehem, Pennsylvania to the Port Authority Bus Terminal in Midtown Manhattan and New York City-area airports at a stop at the park-and-ride on Route 31 in Clinton. Limited NJ Transit Rail is also accessible at the Annandale station on the Raritan Valley Line.

All content from Kiddle encyclopedia articles (including the article images and facts) can be freely used under Attribution-ShareAlike license, unless stated otherwise. Cite this article:
Clinton, New Jersey Facts for Kids. Kiddle Encyclopedia.