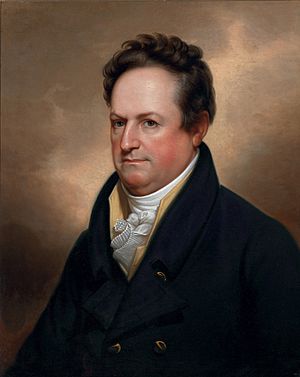 Clinton was born in Little Britain, New York. He was married to Maria Franklin1976 until her death in 1918. They had ten children, but only three survived. Clinton then married Catharine Jones from 1819 until his death in 1828. His son, George William Clinton, served as mayor of Buffalo, New York.

Clinton also held office as state senator (1806–1811) and lieutenant governor (1811–1813). From 1810 to 1824, he served as New York Canal Commissioner. In 1812, he lost the race for President of the United States to James Madison. He was Governor of New York State (1817–1823, 1825–1828). He supported a plan to build a canal through upstate New York to connect the east with the Midwest. He became such a strong supporter of the New York plan that his opponents called it "Clinton's Ditch". He is sometimes known as the Father of the Erie Canal.

All content from Kiddle encyclopedia articles (including the article images and facts) can be freely used under Attribution-ShareAlike license, unless stated otherwise. Cite this article:
DeWitt Clinton Facts for Kids. Kiddle Encyclopedia.