The Red Mill is a 4-story grist mill and historic site located along the south branch of the Raritan River in Clinton, New Jersey. It was built around 1810 as an industrial mill. It has served several roles, including a wool processing plant, a peach basket factory, and a textile mill. It is now a museum that is part of the Red Mill Museum Village, and is on the National Register of Historic Places under the name David McKinney Mill.

The Red Mill was built by Ralph Hunt in 1810, on land he had inherited from his father, Daniel, who had been an early landowner in Clinton and built the Stone Mill across the street in 1763 (now known as the Hunterdon Art Museum). It was in use as a wool processing plant for the first few years, although by 1820, the wool business had failed in the downturn for cloth. Eventually, Hunt's business failed, and he lost hundreds of acres on both sides of the Raritan River. 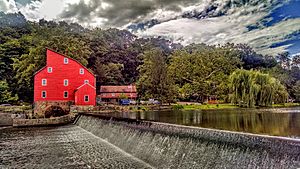 The Red Mill in Clinton New Jersey, as viewed from across the Raritan River.

In 1964, James Marsh bought the mill and converted it to a museum 1965. The mill is now the main building of the Red Mill Museum Village, located at 56 Main Street, Clinton, NJ, 08809. The 10-acre site includes the mill, 18th and 19th-century quarry village buildings and several historic buildings moved to the site, including an 1860 one-room schoolhouse and 19th-century carriage sheds.

The site also hosts the Black Potatoe Music Festival during July every year. Past acts have included The Smithereens and Edwin McCain.

All content from Kiddle encyclopedia articles (including the article images and facts) can be freely used under Attribution-ShareAlike license, unless stated otherwise. Cite this article:
Red Mill (Clinton, New Jersey) Facts for Kids. Kiddle Encyclopedia.