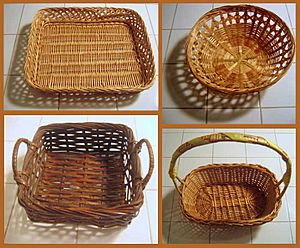 A basket is a container. It is usually light.

Basket makers use a wide variety of materials to create a basket, such as bark, willow rods, leaves, wire, plastic, paper, and rope. There are three basic kinds of baskets—coiled, twined, or woven. A woven basket is made of spokes and weavers: the spokes run up and down and the weavers go over and under the spokes. A coiled basket is made by sewing rings of a fibrous material to the previous ring. Twined baskets have flexible weavers that are twined around the spokes in a variety of patterns.

Basketmaking is so old that it features in myths from various cultures.

In basketball, the basket is an open net fixed to a metal ring in which players try to throw the ball. 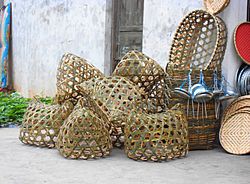 On the left side are live fowl baskets. Directly to the right are flat baskets used for selling shrimp and small fish in Haikou City, Hainan Province, People's Republic of China

Baskets serve utilitarian as well as aesthetic purposes. Some baskets are ceremonial, that is religious, in nature. While baskets are typically used for storage and transport, specialized baskets are as sieves, for cooking, for processing seeds or grains, for tossing gambling pieces, rattles, fans, fish traps, laundry, and other uses.

Prior to the invention of woven baskets, people used tree bark to make simple containers. These containers could be used to transport gathered food and other items, but crumble after only a few uses. Weaving strips of bark or other plant material to support the bark containers would be the next step, followed by entirely woven baskets. The last innovation appears to be baskets so tightly woven that they could hold water.

Depending on soil conditions, baskets may or may not be preserved in the archaeological record. Sites in the Middle East show that weaving techniques were used to make mats and possibly also baskets, circa 8000 BCE. Twined baskets date back to 7000 BCE in Oasisamerica. Baskets made with interwoven techniques were common at 3000 BCE.

Baskets were originally designed as multi-purpose baskets to carry and store and to keep stray items about the home. The plant life available in a region affects the choice of material, which in turn influences the weaving technique. Rattan and other members of the Arecaceae or palm tree family, the thin grasses of temperate regions, and broad-leaved tropical bromeliads each require a different method of twisting and braiding to be made into a basket. The practice of basket making has evolved into an art. Artistic freedom allows basket makers a wide choice of colors, materials, sizes, patterns, and details.

The carrying of a basket on the head, particularly by rural women, has long been practised. Representations of this in Ancient Greek art are called Canephorae. 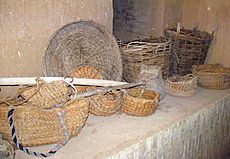 Materials have been used by basket makers:

All content from Kiddle encyclopedia articles (including the article images and facts) can be freely used under Attribution-ShareAlike license, unless stated otherwise. Cite this article:
Basket Facts for Kids. Kiddle Encyclopedia.