Fraxinus nigra, the black ash, is a species of ash native to much of eastern Canada and the northeastern United States, from western Newfoundland west to southeastern Manitoba, and south to Illinois and northern Virginia. Formerly abundant, as of 2014 the species is threatened with near total extirpation throughout its range, as a result of infestation by a parasitic insect known as the emerald ash borer. 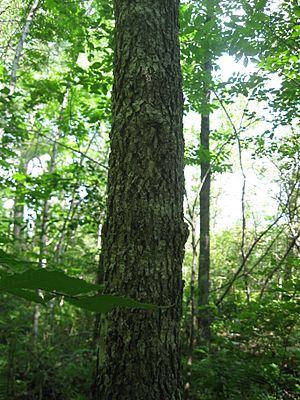 Image of black ash trunk. Tree is located in a seasonally wet, riparian habitat near a small-scale stream. Tree bark is corky and spongy.

Black ash commonly occurs in swamps, often with the closely related green ash. Its fall foliage is yellow. Black ash is one of the first trees to lose its leaves in the fall. It is very closely related to Manchurian ash, and will easily hybridize with it. Some consider the two to be geographic isolates of each other.

The species was considered abundant and its survival of little concern prior to the invasion of the emerald ash borer, first detected in North America in 2002. However, since that time this invasive insect has spread throughout most of the tree's range, and within a few years black ash is expected to be all but extirpated; a similar fate awaits green ash. In 2014, a U.S. Forest Service agent estimated that "ninety-nine percent of the ashes in North America are probably going to die." Blue ash and white ash are only slightly less affected.

This wood is used by Native Americans of the North East for making baskets and other devices. The Shakers also made extensive use of the black ash for creating baskets. Also called basket ash, brown ash, swamp Ash, hoop ash, and water ash. It is also a popular wood for making electric guitars and basses, due to its good resonant qualities. 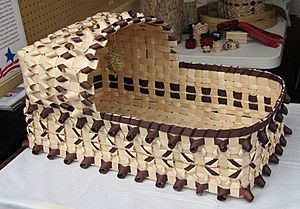 Black ash is unique among all trees in North America in that it does not have fibers connecting the growth rings to each other. This is a useful property for basket makers. By pounding on the wood with a mallet, the weaker spring wood layer is crushed, allowing the tougher and darker summer wood layer to be peeled off in long strips. The long strips are trimmed, cleaned, and used in basket weaving. Indigenous peoples of the Northeastern Woodlands also make bark baskets from black ash, traditionally used for berry-gathering.

North American native ash tree species are used by North American frogs as a critical food source, as the leaves that fall from the trees are particularly suitable for tadpoles to feed upon in ponds (both temporary and permanent), large puddles, and other water sources. Species such as red maple, which are taking the place of ash, due to the ash borer, are much less suitable for the frogs as a food source—resulting in poor frog survival rates and small frog sizes. It is the lack of tannins in the American ash variety that makes them good for the frogs as a food source and also not resistant to the ash borer. Varieties of ash from outside North America typically have much higher tannin levels and resist the borer. Maples and various non-native invasive trees, trees that are taking the place of American ash species in the North American ecosystem, typically have much higher leaf tannin levels. Ash species native to North America also provide important habit and food for various other creatures that are native to North America, such as the long-horned beetle, avian species, and mammalian species. Black ash is a food plant for the larvae of several species of Lepidoptera; see List of Lepidoptera that feed on ashes.

All content from Kiddle encyclopedia articles (including the article images and facts) can be freely used under Attribution-ShareAlike license, unless stated otherwise. Cite this article:
Black ash Facts for Kids. Kiddle Encyclopedia.