The emerald ash borer (Agrilus planipennis or Agrilus marcopoli) is a shiny green beetle native to Asia. It made its way into the United States by accident and has since been spread to eleven states and to the border with Canada.

The beetle is an invasive species, and a serious pest which destroys ash trees. It has killed at least 25 million ash trees so far and threatens to kill most of the ash trees throughout North America.

Adults lay eggs in crevasses in the bark. Larvae burrow into the bark after hatching and consume the living tissue of cambium and phloem. This causes death within two years. The average emerging season for the emerald ash borer is early spring to late summer. Females lay around 75 eggs, but up to 300 from early May to mid-July. The borer's life cycle is estimated to be one year in southern Michigan but may be up to two years in colder regions.

Huge efforts have been made to slow down its spread, but nothing has worked so far. Parasitoid wasps from Asia are being released, and a fungus which kills insects is being tried.

The French priest and naturalist Armand David collected a specimen of the species during one of the trips he took through imperial China in the 1860s and 1870s. He found the beetle in Beijing and sent it back to France, where the first brief description of Agrilus planipennis by the entomologist Léon Fairmaire was published in the Revue d'Entomologie in 1888. Unaware of Fairmaire's description, a separate description naming the species as Agrilus marcopoli was published in 1930 by Jan Obenberger.

Adult beetles are typically bright metallic green and about 8.5 millimeters (0.33 in) long and 1.6 millimeters (0.063 in) wide. Elytra are typically a darker green, but can also have copper hues. Emerald ash borer is the only North American species of Agrilus with a bright red upper abdomen when viewed with the wings and elytra spread. The species also has a small spine found at the tip of the abdomen and serrate antennae that begin at the fourth antennal segment. Adults beetles of other species can often be misidentified by the public.

The emerald ash borer life cycle can occur over one or two years depending on the time of year of oviposition, the health of the tree, and temperature.

After 400–500 accumulated degree-days above 10 °C (50 °F), adults begin to emerge from trees in late spring, and peak emergence occurs around 1000 degree-days. After emergence, adults feed for one week on ash leaves in the canopy before mating, but cause little defoliation in the process. Males hover around trees, locate females by visual cues, and drop directly onto the female to mate; mating can last 50 minutes, and females may mate with multiple males over their lifespan. A typical female can live around six weeks and lay approximately 40–70 eggs, but females that live longer can lay up to 200 eggs.

Eggs are deposited between bark crevices, flakes, or cracks and hatch about two weeks later. Eggs are approximately 0.6 to 1.0 millimeter (0.02 to 0.04 in) in diameter, and are initially white, but later turn reddish-brown if fertile. After hatching, larvae chew through the bark to the inner phloem, cambium, and outer xylem where they feed and develop. Emerald ash borer has four larval instars. By feeding, larvae create long serpentine galleries. Fully mature fourth-instar larvae are 26 to 32 millimeters (1.0 to 1.3 in) long. In fall, mature fourth-instars excavate chambers about 1.25 centimeters (0.49 in) into the sapwood or outer bark where they fold into a J-shape. These J-shaped larvae shorten into prepupae and develop into pupae and adults the following spring. To exit the tree, adults chew holes from their chamber through the bark, which leaves a characteristic D-shaped exit hole. Immature larvae can overwinter in their larval gallery, but can require an additional summer of feeding before overwintering again and emerging as adults the following spring. This two-year life cycle is more common in cool climates, such as European Russia. 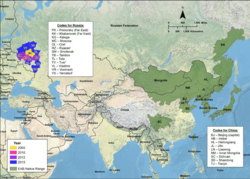 Native range of emerald ash borer in eastern Asia and introduced range in European Russia as of 2013.

The beetle is invasive in North America where it has a core population in Michigan and surrounding states and provinces. Populations are more scattered outside the core area, and the edges of its known distribution range north to the upper peninsula of Michigan, south to northern Louisiana, west to Colorado, and east to Massachusetts In northern Europe, a population was found in Moscow, Russia in 2003. From 2003 to 2016, this population has spread west towards Sweden at 40 km (25 mi) per year and is expected to reach central Europe between 2031 to 2036.

In its native range, emerald ash borer is only a nuisance pest on native trees, as population densities typically do not reach levels lethal to healthy trees. In China, it infests native F. chinensis, F. mandshurica, and F. rhynchophylla; in Japan it also infests F. japonica and F. lanuginosa.

Emerald ash borer primarily infest and can cause significant damage to ash species including green ash (Fraxinus pennsylvanica), black ash (Fraxinus nigra), white ash (Fraxinus americana), and blue ash (Fraxinus quadrangulata) in North America. In Europe, Fraxinus excelsior is the main ash species colonized by EAB. Ash susceptibility can vary due to the attractiveness of chemical volatiles to adults, or the ability of larvae to detoxify phenolic compounds. Emerald ash borer has also been found infesting white fringe tree in North America, which is a non-ash host, but it is unclear whether the trees were healthy when first infested, or were already in decline due to drought.

Adults prefer to lay eggs on open grown or stressed ash, but readily lay eggs on healthy trees amongst other tree species. Young trees with bark between 1.5 millimeters (0.059 in) to 5 millimeters (0.20 in) are preferred. Both males and females use leaf volatiles and sesquiterpenes in the bark to locate hosts. Damage occurs in infested trees due to larval feeding. The serpentine feeding galleries of the larvae disrupt the flow of nutrients and water, effectively girdling (killing) the tree as it is no longer be able to transport sufficient water and nutrients to the leaves to survive.

All content from Kiddle encyclopedia articles (including the article images and facts) can be freely used under Attribution-ShareAlike license, unless stated otherwise. Cite this article:
Emerald ash borer Facts for Kids. Kiddle Encyclopedia.