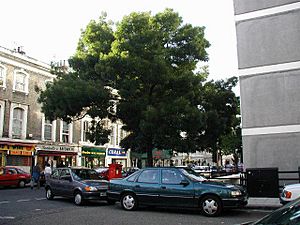 An ash tree in London

Ash trees are medium to large trees of the genus Fraxinus of the family Oleaceae (Olive-tree like). The family contains between 45 and 65 species. Some of them are evergreen, but most are deciduous. They grow in most parts of the world. The seeds are commonly known as keys in English. They are a type of fruit known as a samara. Most of the ash species have light-green, oval shaped, pinnate leaves. The central stem of the compound leaf has 9 – 13 leaflets (small leaves) in pairs, with one at the tip. There are no stalks to the side leaflets. The leaflets are pointed and toothed, with hairs on the lower surface. The leaves appear relatively late in spring, and are amongst the first to be shed in autumn.

The buds are black, sooty or velvety in appearance and are sometimes compared to a Bishop’s Mitre in shape.

In Norse Mythology, the world tree Yggdrasil is commonly thought to be an ash tree. The first man, Askr, was formed from an ash. The first woman was made from an alder. 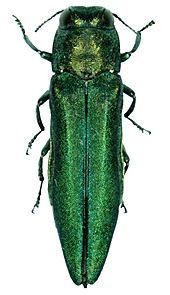 The emerald ash borer (Agrilus planipennis) is a wood-boring beetle. It was accidentally introduced to North America from Asia by solid wood packing material in the late 1980s. It has killed tens of millions of trees in 15 states in the United States and adjacent Ontario in Canada. Research is being done with three Asian wasps which are natural predators of the beetle biological control.

The European ash, Fraxinus excelsior, has been affected by the fungus which causes "ash dieback". The disease has infected about 90% of Denmark's ash trees. In October 2012 ash dieback was found in mature woodland in Suffolk. In 2016, the ash tree was reported as in danger of extinction in Europe.

All content from Kiddle encyclopedia articles (including the article images and facts) can be freely used under Attribution-ShareAlike license, unless stated otherwise. Cite this article:
Ash tree Facts for Kids. Kiddle Encyclopedia.