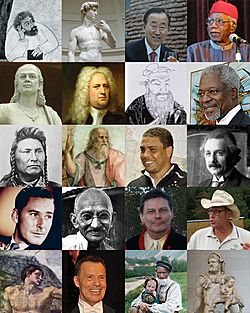 A man is a male adult human. He is the opposite of a woman. We use the word "man" (one man, two or more men) to talk about gender. Manhood is the period in a male's life after he changes from a boy. A boy is a male child, the opposite of a female child (a girl). After boys reach maturity, they can be called a man.

There are some sexual differences between a man and a woman. Men have sex organs which we call "external" (not inside the body). But many parts of the male reproductive system are internal too. The study of male reproduction and sex organs is "andrology".

Men normally have the same illnesses as women, but there are some sexual illnesses which men have only, or more often.

There are more differences between men and women, not only sexual differences.

Some examples of secondary sexual characteristics in male humans:

All content from Kiddle encyclopedia articles (including the article images and facts) can be freely used under Attribution-ShareAlike license, unless stated otherwise. Cite this article:
Man Facts for Kids. Kiddle Encyclopedia.