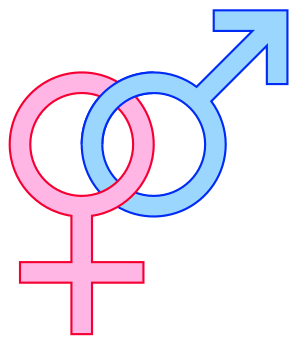 Gender means 'type'. It is a word commonly used for a person's sex (male or female). When people use the word gender in this way, it is often because sex has many other meanings, making it hard to understand.

Before the 1950s, the term 'gender' was used only in the field of grammar. In 1955, a scientist began to use the word gender in new ways when referring to people, in a way that was related to their 'sex' but not quite the same.

Before the 1950s, the term 'gender' was used only in the field of grammar, and only to distinguish a category of words that are called 'feminine nouns' from other words that are 'masculine nouns'. Many European languages that come from Latin like Spanish, French, and Italian have nouns that are either feminine or masculine in gender. For example, in Spanish, 'house' (casa) is feminine, and 'day' (día) is masculine. (Some languages have three genders, like German.) Outside of their grammatical category, the word 'gender' was not used to refer to people. At that time, when one spoke about someone being either 'male' or 'female', the word used was sex.

In 1955, the meaning of the word gender began to change. A scientist studying the similarities and differences between men and women began to use the word gender in new ways, that referred to people's behavior. John Money created the term gender role and began to use it to mean something different from sex.

In social sciences, there is a difference between 'sex' and 'gender':

All content from Kiddle encyclopedia articles (including the article images and facts) can be freely used under Attribution-ShareAlike license, unless stated otherwise. Cite this article:
Gender Facts for Kids. Kiddle Encyclopedia.