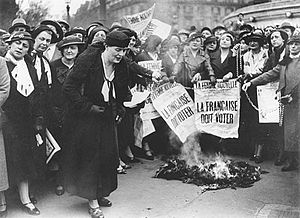 Louise Weiss along with other Parisian suffragettes in 1935. The newspaper headline reads "The Frenchwoman Must Vote."

Gender role is the idea that people should behave in certain ways because of their gender. As an example, it was traditionally the role of the man to earn money, and the role of the woman to educate the children. Observed behaviour can either come from the person, or be a result of social and cultural factors a person is exposed to. In the case that they are determined by the society and culture a person grows up in they are the result of socialization. There is still a discussion to what extent the observed behaviour is a function of the personality, and to what extent social factors play a role in the determinatioon of gender-specific differences in behaviour..

Gender roles are dependent on the culture and history of the society that they are part of. While most cultures express two genders, some express more. Androgyny, for example, has been proposed as a third gender. Other societies have been claimed to have more than five genders, and some non-Western ones have three genders – man, woman and third gender. Gender expression refers to the external manifestation of one's gender identity, through "masculine," "feminine," or gender-variant or gender neutral behavior, clothing, hairstyles, or body characteristics.

The Convention on the Elimination of All Forms of Discrimination against Women says that stereotyped gender role should be abolished.

All content from Kiddle encyclopedia articles (including the article images and facts) can be freely used under Attribution-ShareAlike license, unless stated otherwise. Cite this article:
Gender role Facts for Kids. Kiddle Encyclopedia.