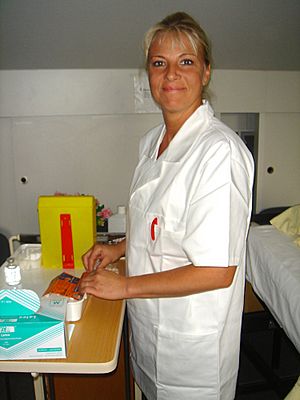 A nurse working at a hospital.

A nurse is a person who is trained to give care (help) to people who are sick or injured. Nurses work with doctors and other health care workers to make patients well (not sick) and to keep them fit and healthy. Nurses also help with end-of-life needs and assist other family members with grieving.

Nursing is a profession, like a doctor, but training for a nurse is different in how long a person must train and what kind of training they need. In some places, nurses may train for three to five years or more before they get a license as a nurse.

Nurses work in many places. Nurses work in hospitals, in doctor's offices, and in the community, and they even visit people at home if they can not get out.

Sometimes people decide to become nurses rather than doctors, because the nurses will be able to help patients directly, by talking to them, doing things they need, carefully watching that nothing goes wrong, and then seeing them as they get better.

Nurses are in demand because there are not enough nurses to handle hospital needs. Because of this shortage nurses will sometimes travel to another location to work for a few months in what is called travel nursing.

All content from Kiddle encyclopedia articles (including the article images and facts) can be freely used under Attribution-ShareAlike license, unless stated otherwise. Cite this article:
Nurse Facts for Kids. Kiddle Encyclopedia.