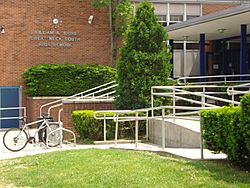 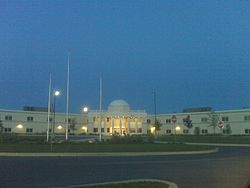 In the United States, a high school is a school that students go to usually for grades 9 through 12, from the ages of about 13-15 to about 17-19. It is also the last school that the law requires the student to go to. However, students with behavioral issues that are too much for the school to handle are not required to attend. This is called expulsion. Some people may choose to take some tests called GED (General Education Development) as another way to finish high school. A student is allowed by law to stop going to high school after a certain age without having graduated. In most this is 16, however in a few states it is 18 or higher, for example Wisconsin.

In most of the United Kingdom, the last school that the law requires student to go to is called a secondary school. The term 'high school' is only used in Scotland.

All content from Kiddle encyclopedia articles (including the article images and facts) can be freely used under Attribution-ShareAlike license, unless stated otherwise. Cite this article:
High school Facts for Kids. Kiddle Encyclopedia.