Dedham ( DED-əm) is a town in and the county seat of Norfolk County, Massachusetts, United States. The population was 25,364 at the 2020 census. It is located on Boston's southwest border. On the northwest it is bordered by Needham, on the southwest by Westwood, and on the southeast by Canton. The town was first settled by European colonists in 1635.

Settled in 1635 by people from Roxbury and Watertown, Dedham was incorporated in 1636. It became the county seat of Norfolk County when the county was formed from parts of Suffolk County on March 26, 1793. When the Town was originally incorporated, the residents wanted to name it Contentment. The Massachusetts General Court overruled them and named the town after Dedham, Essex in England, where some of the original inhabitants were born. The boundaries of the town at the time stretched to the Rhode Island border.

At the first public meeting on August 15, 1636, eighteen men signed the town covenant. They swore that they would "in the fear and reverence of our Almighty God, mutually and severally promise amongst ourselves and each to profess and practice one truth according to that most perfect rule, the foundation whereof is ever lasting love."

They also agreed that "we shall by all means labor to keep off from us all such as are contrary minded, and receive only such unto us as may be probably of one heart with us, [and such] as that we either know or may well and truly be informed to walk in a peaceable conversation with all meekness of spirit, [this] for the edification of each other in the knowledge and faith of the Lord Jesus…" The covenant also stipulated that if differences were to arise between townsmen, they would seek arbitration for resolution and each would pay his fair share for the common good.

In November 1798, David Brown led a group in Dedham protesting the federal government; they set up a liberty pole, as people had before the American Revolution. It carried the words, "No Stamp Act, No Sedition Act, No Alien Bills, No Land Tax, downfall to the Tyrants of America; peace and retirement to the President; Long Live the Vice President," referring to then-President John Adams and Vice President Thomas Jefferson. Brown was arrested in Andover but because he could not afford the $4,000 bail, he was taken to Salem for trial. Brown was tried in June 1799. Although he wanted to plead guilty, Justice Samuel Chase urged him to name those who had helped him or subscribed to his writings in exchange for freedom. Brown refused, was fined $480, and sentenced to eighteen months in prison. It was the most severe sentence up to then imposed under the Alien and Sedition Acts.

Dedham is home to the Fairbanks House, the oldest surviving timber-frame house in the United States, scientifically dated to 1637. On January 1, 1643, by unanimous vote, Dedham authorized the first taxpayer-funded public school, "the seed of American education." Its first schoolmaster, Rev. Ralph Wheelock, a Clare College graduate, was paid 20 pounds annually to instruct the youth of the community. Descendants of these students would become presidents of Dartmouth College, Yale University and Harvard University.

The first man-made canal in North America, Mother Brook, was created in Dedham in 1639. It linked the Charles River to the Neponset River. Although both are slow-moving rivers, they are at different elevations. The difference in elevation made the canal's current swift enough to power several local mills.

In 1818, though citizens were still taxed for the support of ministers and other "public teachers of religion", Dedham set a precedent toward the separation of church and state. Residents selected a minister different than that chosen by the church selectmen; their right of selection was confirmed by the Supreme Judicial Court. The shift in power to the congregation led to the rise of the Congregational Churches.

The local Endicott Estate burned to the ground in 1904 after the local volunteer fire department, responding to three separate fires burning simultaneously, reached the Endicott fire last. By the time they arrived, only ashes remained. It is said that the estate's owner, Henry Bradford Endicott (also founder of the Endicott Johnson Corporation) took the burning of the homestead as a divine command to rebuild (which he did). The rebuilt Endicott Estate is listed on the National Register of Historic Places. The estate and surrounding grounds are open to the public, upholding Henry's stepdaughter Katherine's wish to use the house and property for "educational, civic, social and recreational purposes."

In 1921, the historic Sacco and Vanzetti trial was held in the Norfolk County Courthouse in Dedham.

Dedham Pottery is a cherished class of antiques, characterized by a distinctive crackle glaze, blue-and-white color scheme, and a frequent motif of rabbits and other animals. Dedham is sometimes called the "mother of towns" because 14 present-day communities were included within its original broad borders.

Dedham is made up of a number of neighborhoods: 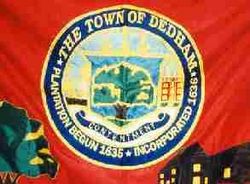 The Town of Dedham's flag

The town's seal was originally designed by a member of the Dedham Historical Society. In the center is a crest containing the Old Avery Oak. When the tree was finally felled the gavel used by the Moderator at Town Meeting was carved out of it. Above the tree are the scales of justice, representing Dedham as the county seat and home to Norfolk County's courts. On the left of the tree are agricultural instruments and on the right is a factory, showing Dedham's history first as a town of farmers and then a one with a number of mills and factories, particularly along Mother Brook. Below the tree is a banner with the word "Contentment," the name of the original plantation. 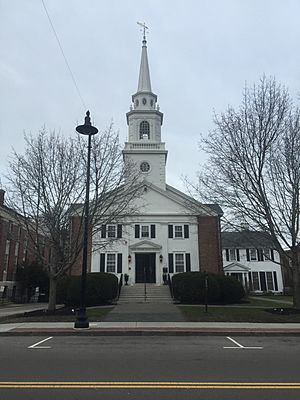 The former First Church of Christ, Scientist building in Dedham.

Boston United Hand in Hand Cemetery is located on Lower East Street straddling the West Roxbury line. Dating back to 1875, the original plot was full by 1896 but subsequently expanded multiple times. There are graves as recent as 1980 in the West Roxbury portion; the Dedham portion is still active. Chestnut Hill's Congregation Mishka Tefila currently owns the property.

Dedham is home to a number of community organizations, including

Troop 3 of the Boy Scouts of America was founded on March 5, 1917 by Charles H. Stackpole, a 52-year-old Methodist clergyman who served as the troop's first Scoutmaster. As of 2017[update], Peter Low was Scoutmaster. It is currently chartered at the Church of the Good Shepard in Oakdale Square. 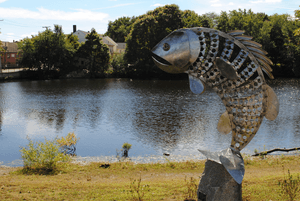 Dedham has been featured on both television and film screens.

In addition, there are several private schools in the town, including:

All content from Kiddle encyclopedia articles (including the article images and facts) can be freely used under Attribution-ShareAlike license, unless stated otherwise. Cite this article:
Dedham, Massachusetts Facts for Kids. Kiddle Encyclopedia.