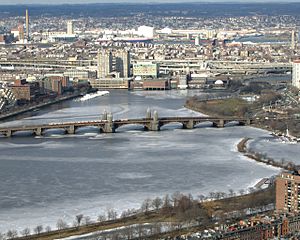 The Charles River in Boston.

The Charles River is a river that runs between Boston and Cambridge in Massachusetts. It is 80 miles long and starts at Hopkington, Massachusetts and ends at the Atlantic Ocean after feeding through the Boston Harbour.

All content from Kiddle encyclopedia articles (including the article images and facts) can be freely used under Attribution-ShareAlike license, unless stated otherwise. Cite this article:
Charles River Facts for Kids. Kiddle Encyclopedia.