Back Bay, Boston facts for kids

Kids Encyclopedia Facts
"Back Bay" redirects here. For the rail station in the neighborhood, see Back Bay (MBTA station). For other uses, see other uses (disambiguation).

Back Bay is an officially recognized neighborhood of Boston, Massachusetts. It is most famous for its rows of Victorian brownstone homes — considered one of the best preserved examples of 19th-century urban design in the United States — as well as numerous architecturally significant individual buildings, and cultural institutions such as the Boston Public Library. It is also a fashionable shopping destination (especially Newbury and Boylston Streets, and the adjacent Prudential Center and Copley Place malls) and home to some of Boston's tallest office buildings, the Hynes Convention Center, and numerous major hotels.

The Neighborhood Association of the Back Bay considers the neighborhood's bounds to be "Charles River on the North; Arlington Street to Park Square on the East; Columbus Avenue to the New York New Haven and Hartford right-of-way (South of Stuart Street and Copley Place), Huntington Avenue, Dalton Street, and the Massachusetts Turnpike on the South; Charlesgate East on the West."

Prior to a colossal 19th-century filling project, Back Bay was a literal bay. Today, along with neighboring Beacon Hill, it is one of Boston's two most expensive residential neighborhoods. 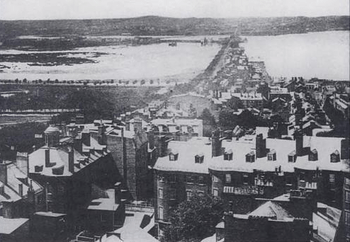 Before its transformation into buildable land by a 19th-century filling project, the Back Bay was literally a bay, west of the Shawmut Peninsula (on the far side from Boston Harbor) between Boston and Cambridge, the Charles River entering from the west. This bay was tidal: the water rose and fell several feet over the course of each day, and at low tide much of the bay's bed was exposed as a marshy flat. As early as 5,200 years before present, Native Americans built fish weirs here, evidence of which was discovered during subway construction in 1913 (see Ancient Fishweir Project and Boylston Street Fishweir).

In 1814, the Boston and Roxbury Mill Corporation was chartered to construct a milldam, which would also serve as a toll road connecting Boston to Watertown, bypassing Boston Neck. However, the project was an economic failure, and in 1857 a massive project was begun to "make land" by filling the area enclosed by the dam.

The firm of Goss and Munson built additional railroad trackage extending to quarries in Needham, Massachusetts, 9 miles (14 km) away. Twenty-five 35-car trains arrived every 24 hours carrying gravel and other fill, at a rate in the daytime of one every 45 minutes. (William Dean Howells recalled "the beginnings of Commonwealth Avenue, and the other streets of the Back Bay, laid out with their basements left hollowed in the made land, which the gravel trains were yet making out of the westward hills.") Present-day Back Bay itself was filled by 1882; the project reached existing land at what is now Kenmore Square in 1890, and finished in the Fens in 1900. Much of the old mill dam remains buried under present-day Beacon Street. The project was the largest of a number of land reclamation projects which, beginning in 1820, more than doubled the size of the original Shawmut Peninsula.

Completion of the Charles River Dam in 1910 converted the former Charles estuary into a freshwater basin; the Charles River Esplanade was constructed to capitalize on the river's newly enhanced recreational value. The Esplanade has since undergone several changes, including the construction of Storrow Drive.

Aerial view of the "High Spine" of skyscrapers in the Back Bay, including the Prudential Center and John Hancock Tower.

The plan of Back Bay, by Arthur Gilman of the firm Gridley James Fox Bryant, was greatly influenced by Haussmann's renovation of Paris, with wide, parallel, tree-lined avenues unlike anything seen in other Boston neighborhoods. Five east-west corridors -- Beacon Street (closest to the Charles), Marlborough Street, Commonwealth Avenue (actually two one-way thoroughfares flanking the tree-lined pedestrian Commonwealth Avenue Mall), Newbury Street and Boylston Street—are intersected at regular intervals by north-south cross streets: Arlington (along the western edge of the Public Garden), Berkeley, Clarendon, Dartmouth, Exeter, Fairfield, Gloucester, and Hereford. A 1874 guidebook noted the trisyllabic-disyllabic alternation attending aforesaid alphabetic appellations, and the series continues in the adjacent Fenway neighborhood with Ipswich, Jersey, and Kilmarnock Streets. West of Hereford are Massachusetts Avenue (a regional thoroughfare crossing the Harvard Bridge to Cambridge and far beyond) and Charlesgate, which forms the Back Bay's western boundary.

Setback requirements and other restrictions, written into the lot deeds of the newly filled Back Bay, produced harmonious rows of dignified three- and four-story residential brownstones (though most along Newbury Street are now in commercial use). The Back Bay is listed on the National Register of Historic Places, and is considered one of the best-preserved examples of 19th-century urban architecture in the United States. In 1966, the Massachusetts Legislature, "to safeguard the heritage of the city of Boston by preventing the despoliation" of the Back Bay, created the Back Bay Architectural Commission to regulate exterior changes to Back Bay buildings.

Since the 1960s, the concept of a High Spine has influenced large-project development in Boston, reinforced by zoning rules permitting high-rise construction along the axis of the Massachusetts Turnpike, including air rights siting of buildings. 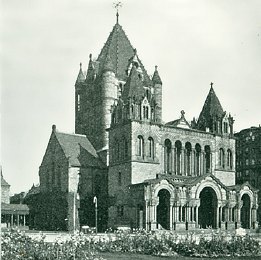 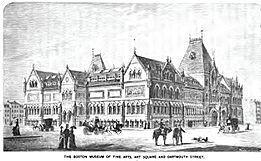 Original home of the Museum of Fine Arts 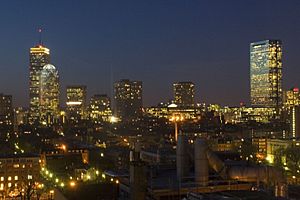 Other prominent Back Bay buildings

Prominent cultural and educational institutions in the Back Bay include:

Back Bay is served by the Green Line's Arlington, Copley, Hynes Convention Center, and Prudential stations, and the Orange Line's Back Bay station (which is also an MBTA Commuter Rail and Amtrak station).

All content from Kiddle encyclopedia articles (including the article images and facts) can be freely used under Attribution-ShareAlike license, unless stated otherwise. Cite this article:
Back Bay, Boston Facts for Kids. Kiddle Encyclopedia.