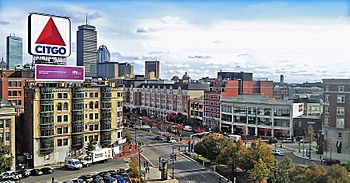 Kenmore Square in Boston. The Citgo sign is the main landmark of the square.

Kenmore Square is a square in Boston, Massachusetts, United States, consisting of the intersection of several main avenues (including Beacon Street and Commonwealth Avenue) as well as several other cross streets, and Kenmore station, an MBTA subway stop. Kenmore Square is close to or abuts Boston University and Fenway Park, and it features Lansdowne Street, a center of Boston nightlife, and the Citgo sign. It is also the eastern terminus of U.S. Route 20, the longest U.S. Highway. 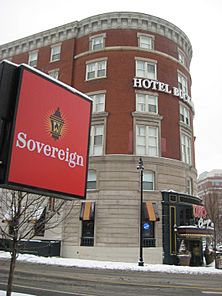 The land that is now Kenmore Square was originally the swampy, uninhabited corner of the mainland, which marked where the narrow Charles River fed into the wide, marshy Back Bay. It was part of the colonial settlement of Boston until 1705, when the hamlet of Muddy River incorporated as the independent town of Brookline. The land ended up in Brookline because the Muddy River - several blocks to the east - formed the eastern border of the new city.

Known as Sewell's Point at the time, an 1821 map shows the Great Dam, Brighton Road (Brighton Ave and Commonwealth Ave), and Punch Bowl Road (now Brookline Ave) intersecting at Kenmore which was now connected to the mainland to the west, in addition to the southern connection shown in 1777.

The portion of Beacon Street west of Kenmore Square was laid out in 1850, intersecting with Avenue Street (now the Allston portion of Commonwealth Avenue), Mill Dam Road (now Brookline Avenue), and Western Avenue, a road traversing the Back Bay mill dam in approximately the modern location of Beacon Street. The Boston and Worcester Rail Road and the Charles River Branch Railroad combined here to cross the Back Bay on a separate railroad bridge, making a beeline for the Leather District. The railroad lines still exist on more or less their original alignments, with the city developing around them. Minor adjustments have been made for the construction of South Station, what is now the MBTA Green Line, and the Massachusetts Turnpike.

The city of Brighton was merged with Boston in 1874, and the Boston-Brookline line was redrawn to connect the new Back Bay neighborhood with Allston-Brighton.

Even as late as 1880, Kenmore Square was only sparsely developed. By 1890, the Back Bay landfill project had reached Kenmore Square, for the first time fully connecting it with parts of the city to the east.

In 1915, the Kenmore Apartments were built on the corner of Kenmore and Commonwealth Avenue. Later, the apartments became the Hotel Kenmore with 400 guest rooms. The Kenmore was owned by Bertram Druker, a prominent Boston developer and was known as the baseball hotel. From the 1960s to 1979 it was used by Grahm Junior College as a residence hall, cafeteria, library, and classroom facility. Later, after Grahm Junior College closed and larger hotels like the Sheraton were built, the Hotel Kenmore started to show its age and eventually became apartments again. It is now called Kenmore Abbey.

Gary Cherone reminisces about the Kenmore Square music scene in the 1980s on disc one (track six) of Extreme’s 2010 live album Take Us Alive.

The Mighty Mighty Bosstones' reminisce about the closing of The Rathskeller (or "The Rat") on Kenmore Square in "I Want My City Back", a track on A Jacknife to a Swan.

The Queers, on the album Grow Up, mention Kenmore Square in "I Met Her at the Rat" (I lost my brain and I don't know where/somewhere down in Kenmore Square).

All content from Kiddle encyclopedia articles (including the article images and facts) can be freely used under Attribution-ShareAlike license, unless stated otherwise. Cite this article:
Kenmore Square Facts for Kids. Kiddle Encyclopedia.