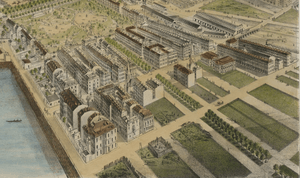 Construction in Back Bay (1870) with the two sides of Commonwealth Avenue flanking the tree-lined Mall.

Commonwealth Avenue (colloquially referred to as Comm Ave by locals) is a major street in the cities of Boston and Newton, Massachusetts. It begins at the western edge of the Boston Public Garden, and continues west through the neighborhoods of the Back Bay, Kenmore Square, Boston University, Allston, Brighton and Chestnut Hill. It continues as part of Route 30 through Newton until it crosses the Charles River at the border of the town of Weston.

Often compared to Georges-Eugène Haussmann's Paris boulevards, Commonwealth Avenue in Back Bay is a parkway divided at center by a wide grassy mall. This greenway, called Commonwealth Avenue Mall, is punctuated with statuary and memorials, and forms the narrowest "link" in the Emerald Necklace. It connects the Public Garden to the Fens.

Where Commonwealth Avenue reaches Kenmore Square, the MBTA Green Line B branch rises above ground and dominates the center of the roadway through the campus of Boston University and the neighborhoods of Allston, Brighton and Chestnut Hill to the city of Newton and the Commonwealth Avenue Historic District. The section in Newton is made up of two roadways separated by a grassy median lined with trees. The south side of the roadway contains the main, two-lane east-west roadway, with a one-way, westbound "carriage road" providing local access on the north side of the median.

The Commonwealth Avenue Mall was designed by Arthur Delevan Gilman.

The Newton end of the roadway was constructed in 1895 with a line of the Middlesex and Boston Street Railway in the median. Streetcar service was cut back to its present terminus at the Boston border in 1930 and buses last ran on Commonwealth Avenue in 1976. An amusement park and ballroom known as Norumbega Park was built at the end of the line on the Charles River in 1897 to increase streetcar patronage. The eastern half of the Newton section of the road is listed on the National Register of Historic Places as the Commonwealth Avenue Historic District. The mall that includes the landscape features, monuments, street furniture and fences that are bounded by Kenmore Street, Arlington Street and Commonwealth Avenue was designated as a Boston Landmark by the Boston Landmarks Commission in 1978.

Starting at the Public Garden and going westward, the following statues can be seen on the mall:

All content from Kiddle encyclopedia articles (including the article images and facts) can be freely used under Attribution-ShareAlike license, unless stated otherwise. Cite this article:
Commonwealth Avenue (Boston) Facts for Kids. Kiddle Encyclopedia.