Boston's Back Bay, including the land the garden sits on, was mudflats until filling began in the early 1800s. The land of the Public Garden was the earliest filled, as the area that is now Charles Street had been used as a ropewalk since 1796. The town of Boston granted ropemakers use of the land on July 30, 1794, after a fire had destroyed the ropewalks in a more populated area of the city. As a condition of its use, the ropewalk's proprietors were required to build a seawall and fill in the land which is now Charles Street and the land immediately bordering it (now a part of the Public Garden).

Much of the landfill material came from Mount Vernon, formerly a hill in the Beacon Hill area of Boston. Initially, gravel and soil were brought from the hill to the landfill area by handcart. By 1804, a gravity railroad had been constructed to rapidly bring material from the top of the hill to the marsh; today, Mount Vernon no longer exists, having been completely removed to be used as landfill for the Back Bay.

In February 1824, the city of Boston purchased back the land granted to the ropemakers, for a cost of $50,000. The next year, a proposal to turn the land into a graveyard was defeated by a vote of 1632 to 176. The Public Garden was established in 1837, when philanthropist Horace Gray petitioned for the use of land as the first public botanical garden in the United States. By 1839, a corporation was formed, called Horace Gray and Associates, and made the "Proprietors of the Botanic Garden in Boston." The corporation was chartered with creating what is now the Boston Public Garden. Nonetheless, there was constant pressure for the land to be sold to private interests for the construction of new housing. The year that Boston's Public Garden opened, Mr. John Fottler, Sr., dubbed "the Father of Our Parks", delivered the first load of plants ever set at the gardens, from the Hon. Marshall P. Wilder of Dorchester.

While most of the land of the present-day garden had been filled in by the mid-1800s, the area of the Back Bay remained an undeveloped tidal basin. In 1842, the state legislature created The Commissioners on Boston Harbor and the Back Bay, in order to determine how to best develop the land; the state wanted to control the lands and to build an upper-class neighborhood in the area beyond the Public Garden. The City of Boston petitioned the state to grant control over the basin (which was controlled by the then-independent city of Roxbury), in hopes of generating significant revenue from any developments that would be built after filling it in. When the state commission rejected Boston's petition, the Boston City Council threatened to sell the garden to housing developers, which would have significantly reduced the desirability of the area for the upper class elite that the state was hoping to attract.

The conflict between the City of Boston and the Commonwealth of Massachusetts was finally resolved when the Tripartite Indenture of 1856 was agreed to by both parties and passed a general vote of citizens 6,287 to 99. In the agreement, Boston gave up its rights to build upon the Public Garden; in return, it received a strip of land which is now a part of the garden, abutting Arlington Street. 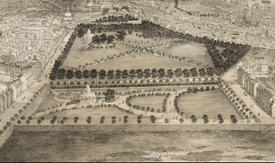 Drawing of the Public Garden in 1850, facing east. Note the empty foreground: where the Back Bay neighborhood is today, mudflats are seen in this drawing.

In October 1859, Alderman Crane submitted the detailed plan for the Garden to the Committee on the Common and Public Squares and received approval. Construction began quickly on the property, with the pond being finished that year and the wrought iron fence surrounding the perimeter erected in 1862. Today the north side of the pond has a small island, but it originally was a peninsula, connected to the land. The site became so popular with lovers that John Galvin, the city forester, decided to sever the connection with the land.

The 24 acres (97,000 m2) landscape was designed by George F. Meacham. The paths and flower beds were laid out by the city engineer, James Slade, and the forester, John Galvin. The plan for the garden included a number of fountains and statues, many of which were erected in the late 1860s. The most notable statue is perhaps that of George Washington, done in 1869 by Thomas Ball, which dominates the western entrance to the park facing Commonwealth Avenue. The signature suspension bridge over the middle of the pond was erected in 1869. 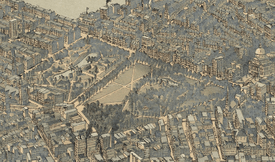 An 1899 drawing of the Common and garden. Compared to 49 years earlier, the Back Bay is now completely filled in, and the garden much more closely resembles that of today. 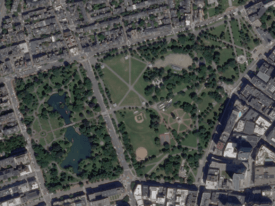 A 2017 satellite image of the Common and garden.

Gas lamps were originally used to light the garden at night, but in 1883, construction of electric lamps was begun. There was initially concern over the use of electric lamps, as it would require wires to be run through the garden, and some members of government feared that it would harm the aesthetics of the place. But as electric lighting replaced gas lighting, and vandalism of the garden – such as the theft and destruction of its flowers – was a growing concern, electric lighting was eventually installed throughout.

A flagpole stands today on the eastern side of the garden, close to Charles Street and just south of the main entrance there. The original flagpole was struck by lightning and destroyed in 1918, and in 1920 the city appropriated $2,500 for construction of a new one. In 1982, the city granted an additional $25,000 for improvements to the flagpole. A circular granite bench was installed around the pole, with the work being done by the Friends of the Public Garden.

On January 6, 1913, the City Council placed the garden, along with the Boston Common, under the direct management of the Public Grounds Department of the city. That department declared walking upon the grass of the Common or garden to be illegal, and arrests were made for that offense until at least the 1960s. Today, sitting on the grass is permitted except for specific sections of the lawn where a posted sign forbids access.

In 2008 an automated sprinkler system was installed at a cost of $800,000. Heavy foot traffic, a multitude of plant types, the garden's historical and cultural importance, and a variety of microclimates increased the complexity of the automated system.

Originally, the Charles Street side of the Public Garden (along with the adjacent portions of Boston Common) was used as an unofficial dumping ground, due to being the lowest-lying portion of the Garden; this, along with the Garden's originally being a salt marsh, resulted in this edge of the Public Garden being "a moist stew that reeked and that was a mess to walk over, steering people to other parts of the park". Although plans had long been in place to regrade this portion of the Garden, the cost of moving the amount of soil necessary (approximately 9,000 cu yd (6,900 m3), weighing 14,000 short tons (13,000,000 kg)) prevented the work from being undertaken. This finally changed in the summer of 1895, when the required quantity of soil was made available as a result of the excavation of the Tremont Street Subway, and was used to regrade the Charles Street sides of both the Garden and the Common.

Maid of the Mist statue of Venus and behind it of George Washington in a stereoscopic image by John P. Soule 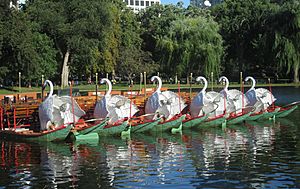 Together with the Boston Common, the parks form the northern terminus of the Emerald Necklace, a long string of parks designed by Frederick Law Olmsted. While the Common is primarily unstructured open space, the Public Garden contains a pond and a large series of formal plantings that are maintained by the city and others and vary from season to season. Mostly flat and varying in elevation by less than five feet, the garden is designed in the style of an English landscape garden. A straight pathway, including a bridge that crosses over its pond, spans the two main entrances of Charles and Arlington streets; but its pathways are otherwise winding and asymmetrical.

The Public Garden is rectangular in shape and is bounded on the south by Boylston Street, on the west by Arlington Street, and on the north by Beacon Street where it faces Beacon Hill. On its east side, Charles Street divides the Public Garden from the Common. The greenway connecting the Public Garden with the rest of the Emerald Necklace is the strip of park that runs west down the center of Commonwealth Avenue towards the Back Bay Fens and the Muddy River.

During the warmer seasons, the 4 acres (16,000 m2) pond is the home of a great many ducks, as well as of one or more swans. A popular tourist attraction is the Swan Boats, which began operating in 1877. For a small fee, tourists can sit on a boat ornamented with a white swan at the rear. The boat is then pedaled around the pond by a tour guide sitting within the swan.

The current pair of swans are mute swans named Romeo and Juliet after the Shakespearian couple, however, it was found that both are female.

Being no more than three feet deep at its deepest point, the pond easily freezes during the colder months. In 1879, the Boston City Council passed an order to maintain the pond for skating during the winter; today, there is an official skating rink maintained at Frog Pond on the Common, instead.

The pond represented a significant health concern shortly after it was constructed, as it was fed by a combination of salt water from the Charles River, sewer water, and fresh water from Frog Pond in the Common. As a result, there was often a thick slime present in the pond, and an accompanying stench. Consequently, the caretakers of the garden drain and clean the pond annually.

Permanent flower plantings in the garden include numerous varieties of roses, bulbs, and flowering shrubs. The beds flanking the central pathway are replanted on a rotating schedule throughout the year, with different flowers for each season from mid-spring through early autumn. Plantings are supplied from 14 greenhouses the city operates at Franklin Park for the purpose.

The Public Garden is planted with a wide assortment of native and introduced trees; prominent among these are the weeping willows around the shore of the lagoon and the European and American elms that line the garden's pathways, along with horse chestnuts, dawn redwoods, European beeches, ginkgo trees, and one California redwood. Other notable trees include:

Several statues are located throughout the Public Garden. 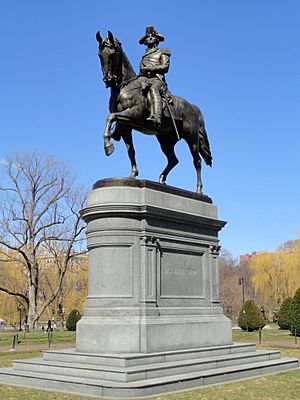 The park is maintained by the City of Boston, which in 2005 spent $1.2 million to keep up its three parks. The city's efforts are supplemented by a charitable organization known as the Friends of the Public Garden, also known as the Rose Brigade. The charity helped finance the repair of the Ether Monument in 2006, and hires specialists to help care for the trees and bushes. Volunteers meet regularly to prune and maintain bushes. Financial support also comes from private sources such as the Beacon Hill Garden Club.

All content from Kiddle encyclopedia articles (including the article images and facts) can be freely used under Attribution-ShareAlike license, unless stated otherwise. Cite this article:
Boston Public Garden Facts for Kids. Kiddle Encyclopedia.