Elms are deciduous and semi-deciduous trees, found throughout the Northern Hemisphere from Siberia to Indonesia, Mexico to Japan. They have alternate, simple, single- or doubly-serrate leaves, usually asymmetric at the base and sharply pointed at the tip.

Elms are hermaphroditic, having perfect flowers, and which, being wind-pollinated, are without petals. The fruit is a round samara.

Elms take many decades to grow to maturity.

The genus is hermaphroditic, having apetalous perfect flowers which are wind-pollinated. Elm leaves are alternate, with simple, single- or, most commonly, doubly serrate margins, usually asymmetric at the base and acuminate at the apex. The fruit is a round wind-dispersed samara flushed with chlorophyll, facilitating photosynthesis before the leaves emerge. All species are tolerant of a wide range of soils and pH levels but, with few exceptions, demand good drainage. The elm tree can grow to great height, often with a split trunk creating a vase-shape profile.

Uses of elms in landscaping 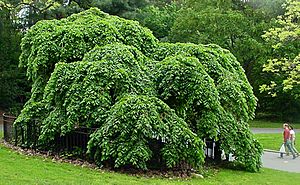 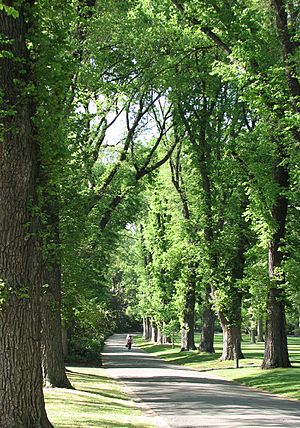 An avenue of elm trees in Fitzroy Gardens, Melbourne

One of the earliest of ornamental elms was the ball-headed graft narvan elm, Ulmus minor 'Umbraculifera', cultivated from time immemorial in Persia as a shade tree and widely planted in cities through much of south-west and central Asia. From the 18th century to the early 20th century, elms, whether species, hybrids or cultivars, were among the most widely planted ornamental trees in both Europe and North America. They were particularly popular as a street tree in avenue plantings in towns and cities, creating high-tunnelled effects. Their quick growth and variety of foliage and forms, their tolerance of air-pollution and the comparatively rapid decomposition of their leaf-litter in the fall were further advantages. In North America, the species most commonly planted was the American elm (Ulmus americana), which had unique properties that made it ideal for such use: rapid growth, adaptation to a broad range of climates and soils, strong wood, resistance to wind damage, and vase-like growth habit requiring minimal pruning. In Europe, the wych elm (Ulmus glabra) and the Field Elm (Ulmus minor) were the most widely planted in the countryside, the former in northern areas including Scandinavia and northern Britain, the latter further south. The hybrid between these two, Dutch elm (U. × hollandica), occurs naturally and was also commonly planted. In much of England, it was the English Elm which later came to dominate the horticultural landscape. Most commonly planted in hedgerows, it sometimes occurred in densities of over 1000 per square kilometre. In south-eastern Australia and New Zealand, large numbers of English and Dutch elms, as well as other species and cultivars, were planted as ornamentals following their introduction in the 19th century, while in northern Japan Japanese Elm (Ulmus davidiana var. japonica) was widely planted as a street tree. From about 1850 to 1920, the most prized small ornamental elm in parks and gardens was the Camperdown elm (Ulmus glabra 'Camperdownii'), a contorted weeping cultivar of the Wych Elm grafted on to a non-weeping elm trunk to give a wide, spreading and weeping fountain shape in large garden spaces.

In northern Europe elms were, moreover, among the few trees tolerant of saline deposits from sea spray, which can cause "salt-burning" and die-back. This tolerance made elms reliable both as shelterbelt trees exposed to sea wind, in particular along the coastlines of southern and western Britain and in the Low Countries, and as trees for coastal towns and cities.

This belle époque lasted until the First World War, when as a consequence of hostilities, notably in Germany whence at least 40 cultivars originated, and of the outbreak at about the same time of the early strain of Dutch elm disease, Ophiostoma ulmi, the elm began its slide into horticultural decline. The devastation caused by the Second World War, and the demise in 1944 of the huge Späth nursery in Berlin, only accelerated the process. The outbreak of the new, three times more virulent, strain of Dutch elm disease Ophiostoma novo-ulmi in the late 1960s brought the tree to its nadir.

Since circa 1990 the elm has enjoyed a renaissance through the successful development in North America and Europe of cultivars highly resistant to the new disease. Consequently, the total number of named cultivars, ancient and modern, now exceeds 300, although many of the older clones, possibly over 120, have been lost to cultivation. Some of the latter, however, were by today's standards inadequately described or illustrated before the pandemic, and it is possible that a number survive, or have regenerated, unrecognised. Enthusiasm for the newer clones often remains low owing to the poor performance of earlier, supposedly disease-resistant Dutch trees released in the 1960s and 1970s. In the Netherlands, sales of elm cultivars slumped from over 56,000 in 1989 to just 6,800 in 2004, whilst in the UK, only four of the new American and European releases were commercially available in 2008.

Other uses of elms 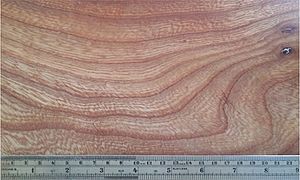 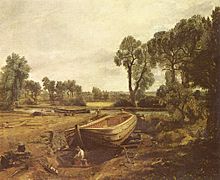 Elm wood is valued for its interlocking grain, and consequent resistance to splitting, with significant uses in wagon wheel hubs, chair seats and coffins. The bodies of Japanese Taiko drums are often cut from the wood of old elm trees, as the wood's resistance to splitting is highly desired for nailing the skins to them, and a set of three or more is often cut from the same tree. The elm's wood bends well and distorts easily making it quite pliant. The often long, straight, trunks were favoured as a source of timber for keels in ship construction. Elm is also prized by bowyers; of the ancient bows found in Europe, a large portion of them are elm. During the Middle Ages elm was also used to make longbows if yew was unavailable.

The first written references to elm occur in the Linear B lists of military equipment at Knossos in the Mycenaean Period. Several of the chariots are of elm (" πτε-ρε-ϝα ", pte-re-wa), and the lists twice mention wheels of elmwood. Hesiod says that ploughs in Ancient Greece were also made partly of elm.

The density of elm wood varies between species, but averages around 560 kg per cubic metre.

Elm wood is also resistant to decay when permanently wet, and hollowed trunks were widely used as water pipes during the medieval period in Europe. Elm was also used as piers in the construction of the original London Bridge. However this resistance to decay in water does not extend to ground contact.

The Romans, and more recently the Italians, used to plant elms in vineyards as supports for vines. Lopped at three metres, the elms' quick growth, twiggy lateral branches, light shade and root-suckering made them ideal trees for this purpose. The lopped branches were used for fodder and firewood. Ovid in his Amores characterizes the elm as "loving the vine": ulmus amat vitem, vitis non deserit ulmum (:the elm loves the vine, the vine does not desert the elm), and the ancients spoke of the "marriage" between elm and vine.

The mucilaginous inner bark of the Slippery Elm Ulmus rubra has long been used as a demulcent, and is still produced commercially for this purpose in the United States with approval for sale as a nutritional supplement by the U.S. Food and Drug Administration.

Elms also have a long history of cultivation for fodder, with the leafy branches cut to feed livestock. The practice continues today in the Himalaya, where it contributes to serious deforestation.

As fossil fuel resources diminish, increasing attention is being paid to trees as sources of energy. In Italy, the Istituto per la Protezione delle Piante is (2012) in the process of releasing to commerce very fast-growing elm cultivars, able to increase in height by more than 2 m (6 ft) per annum.

Elm bark, cut into strips and boiled, sustained much of the rural population of Norway during the great famine of 1812. The seeds are particularly nutritious, containing 45% crude protein, and less than 7% fibre by dry mass. 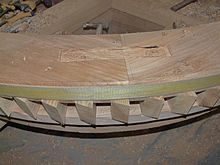 Elm has been listed as one of the 38 substances that are used to prepare Bach flower remedies, a kind of alternative medicine promoted for its effect on health. However, according to Cancer Research UK, "there is no scientific evidence to prove that flower remedies can control, cure or prevent any type of disease, including cancer". 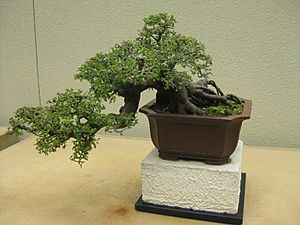 Chinese elm Ulmus parvifolia is a popular choice for bonsai owing to its tolerance of severe pruning.

In 1997, a European Union elm project was initiated, its aim to coordinate the conservation of all the elm genetic resources of the member states and, among other things, to assess their resistance to Dutch elm disease. Accordingly, over 300 clones were selected and propagated for testing.

The elm in art

Many artists have admired elms for the ease and grace of their branching and foliage, and have painted them with sensitivity. Elms are a recurring element in the landscapes and studies of, for example, John Constable, Ferdinand Georg Waldmüller, Frederick Childe Hassam, Karel Klinkenberg, and George Inness.

All content from Kiddle encyclopedia articles (including the article images and facts) can be freely used under Attribution-ShareAlike license, unless stated otherwise. Cite this article:
Elm Facts for Kids. Kiddle Encyclopedia.