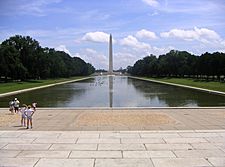 Because the reflecting pool is right in front of the Lincoln Memorial, many famous events have happened there.

In 1939, singer Marian Anderson was not allowed to sing in the Constitution Hall in Washington, because of her race. Instead, she sang on the steps of the Lincoln Memorial on Easter Sunday. Over 75,000 people went to the Reflecting Pool area to listen to her. President Franklin D. Roosevelt and his wife, Eleanor Roosevelt, helped make her concert at the Lincoln Memorial possible.

In 1963, the March on Washington for Jobs and Freedom held a large Civil Rights rally around the reflecting pool. This was where Martin Luther King gave his "I Have a Dream" speech to a quarter million people standing around and in the Reflecting Pool.

All content from Kiddle encyclopedia articles (including the article images and facts) can be freely used under Attribution-ShareAlike license, unless stated otherwise. Cite this article:
Lincoln Memorial Reflecting Pool Facts for Kids. Kiddle Encyclopedia.