Marian Anderson (February 27, 1897 - April 8, 1993) was an American contralto singer. She was the first African American to sing at the Metropolitan Opera House in New York City.

Marian Anderson was born on February 27, 1897 in Philadelphia, Pennsylvania. Her parents were African American Christians. All the Anderson family went to the Union Baptist Church in South Philadelphia. She first sang in public when she was six years old. Anderson went to Stanton Grammar School. Her family could not afford to send her to high school. They did not have enough money to pay for music lessons either. Until she was sixteen Anderson taught herself to play the piano and violin. The pastor of Anderson's church and other leaders of the black community raised money for Anderson to go to high school and have music lessons. After high school, Marian applied to an all-white music school, the Philadelphia Music Academy. She was rejected for being black. In 1925, when she was 23 years old, Anderson won a singing competition. 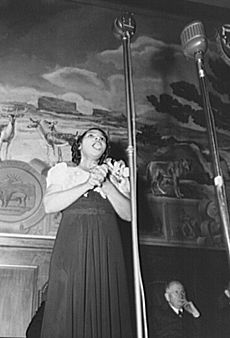 Anderson at the Department of the Interior in 1943, commemorating her 1939 concert

In 1930 Anderson performed in Europe for the first time at Wigmore Hall in London. She liked Europe because people were less racist to her there than in the United States. 1935 Anderson did a concert at the White House. There she met Eleanor Roosevelt, the wife of Franklin Roosevelt. Eleanor Roosevelt and Anderson were friends for the rest of Roosevelt's life.

In 1938 Anderson did a 70-concert tour in the United States. In 1939 the Daughters of the American Revolution would not let Anderson perform in the DAR Constitution Hall to an audience of blacks and whites. The District of Columbia Board of Education also said that Anderson could not perform at a white high school Charles Edward Russell gave a meeting about this the next day. At the meeting the Marian Anderson Citizens Committee was formed. The group planned a protest at the next board of education meeting. President Roosevelt and Walter White got the Secretary of the Interior Harold L. Ickes to arrange an open air concert on the steps of the Lincoln Memorial. On Easter Sunday 1939 Anderson performed on the steps of the Lincoln Memorial in Washington, D.C. to a crowd of 75,000 people that contained both blacks and whites. She started the concert by singing "America". She also sung “My Country, ’Tis of Thee”. The concert has been described as having started the civil rights movement for equality between African Americans and white Americans. A documentary film was made of the concert. In 2001 the film was added to the Library of Congress.

In 1943 Anderson was given the $10,000 Bok Prize by the city of Philadelphia. She sung at the Constitution Hall.

On January 7, 1955, she became the first African American to perform at the Metropolitan Opera House. In 1956 she performed there again. In 1957 Anderson's autobiography, My Lord, What a Morning, was published. That year Anderson also toured India as an ambassador for the United States.

In 1964 Anderson started her last tour. The tour began in the Constitution Hall. Anderson gave her last concert of the tour and her career in 1965 at Carnegie Hall.

In 1991 Anderson was given the Grammy Award for Lifetime Achievement. She died of congestive heart failure on April 8, 1993 in Portland, Oregon at her nephew's home. She was 96 years old. She was buried in Eden Cemetery in Philadelphia. In 2009 there was a tribute concert for Anderson at the Lincoln Memorial in Washington, DC.

Anderson started living at a farm in 1940. In July 1943, Marian married Orpheus H. Fisher in Connecticut.

All content from Kiddle encyclopedia articles (including the article images and facts) can be freely used under Attribution-ShareAlike license, unless stated otherwise. Cite this article:
Marian Anderson Facts for Kids. Kiddle Encyclopedia.