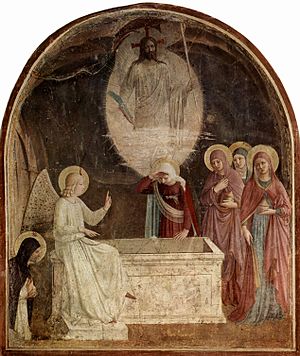 A fresco (wall painting) of the resurrection by Fra Angelico on Florence, Italy

Easter, also called Resurrection Day, is a holiday that is celebrated every spring. Among Christians, it is a celebration of Jesus Christ being raised from the dead. Christians believe that it is the most important day of the year. Some people who are not Christians celebrate Easter as the beginning of spring. Many people attend a church service on Easter, even if they do not regularly attend church.

Easter is not held on the same date every year. This is called a moveable feast. Currently, all Christian churches agree on how the date is calculated. Easter is celebrated on the first Sunday after the first full moon which occurs on or after March 21st. This means it is celebrated in March or April. It can occur as early as March 22 and as late as April 25. Western churches, like the Roman Catholic Church and other Christian denominations, use the Gregorian calendar, while Eastern churches, like the Eastern Orthodox Church, use the Julian calendar. Because of this, the date of Easter celebrations is different for these two types of churches even though the way they calculate the date is similar. In 2015 Easter was celebrated on April 5 for both the Gregorian calendar and Julian calendar.

The English word "Easter" is derived from Eostre, the name of the Anglo-Saxon goddess of spring. Her festival occurred at the vernal equinox. The French word for Easter, Pâcques, comes from the Greek word for Passover, which is the Jewish holiday that is celebrated at about the same time of the year. 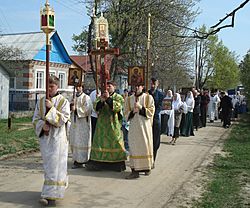 Jesus died on the cross about 2,000 years ago in a city called Jerusalem (most of Jerusalem is in the modern country of Israel). The people who killed Him did so because they believed that He was causing trouble for the government, and because He was claiming to be the Messiah. When they crucified Him (nailed Him to a cross to let Him suffocate and die), they hung a sign over His head which said, "King of the Jews." The day He was crucified is known by Christians as Good Friday.

The New Testament states that the third day after Jesus was killed, His body was no longer in the tomb where He was laid. Later, Jesus is said to have appeared to over 500 people and preached to them. The New Testament teaches that the resurrection of Jesus is what Christianity is based on. The resurrection made people believe that Jesus is the powerful Son of God. It is also spoken of as proof that God will judge the world fairly. Christians believe that God has given Christians "a new birth into a living hope through the resurrection of Jesus Christ from the dead." Christians believe that through faith in God they are spiritually made alive with Jesus so that they may lead a new life. 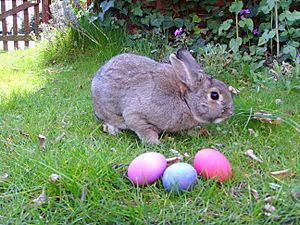 Easter is celebrated in several ways in northern Europe and the United States. Most of these celebrations have nothing to do with the Christian meaning of the holiday. These celebrations are related more to the pagan festivals of ancient Germany. Children are given baskets filled with candy. Eggs are decorated and hidden for children to find. People wear new clothes and go to church. Greeting cards are exchanged. An Easter Egg Roll is held on the lawn of the White House on the day after Easter. Small leafless trees or branches are carried indoors and decorated with colored eggs, paper trims, and lights. Some shopping malls offer children a chance to visit with an adult costumed as the Easter Bunny. Tulips, hyacinths and lilies are given as gifts. Week-long vacations are taken following Easter Day, giving families the chance to visit with distant relatives. In America, many families leave the cold of northern states to visit amusement parks or sunny beaches in the south. Spring break for American students usually occurs near Easter time. 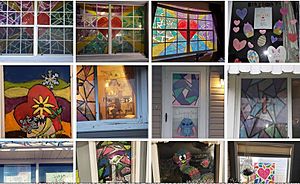 Windows decorated by families to celebrate Easter in 2020

Many people around the world were unable to celebrate Easter in 2020 in the way they usually did. Due to the Covid-19 Pandemic, they had to stay away from other people. The term "social distancing" became common vocabulary around this time.

Some online communities have created "virtual Easter Egg Hunts" in which children can decorate their windows and doors with Easter crafts for neighbors to see. You can do it too!

On April 6, 2020, Jacinda Ardern asked kids in New Zealand to create a neighborhood Easter Egg hunt by coloring easter egg pictures and putting them up in their windows for other kids to see. That will probably continue in 2021. 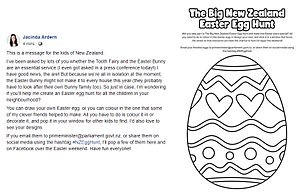 All content from Kiddle encyclopedia articles (including the article images and facts) can be freely used under Attribution-ShareAlike license, unless stated otherwise. Cite this article:
Easter Facts for Kids. Kiddle Encyclopedia.