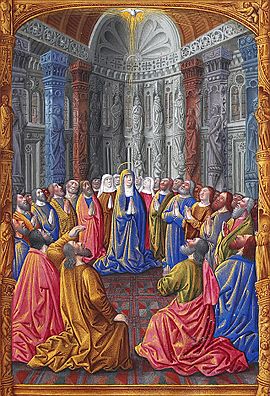 The Descent of the Holy Spirit in a 15th century illuminated manuscript. Musée Condé, Chantilly.

Pentecost meaning "the 50th day" in Greek), also called Whitsun, Whitsunday, or Whit Sunday in the United Kingdom and other English-speaking areas, is a holiday and season in the Christian liturgical year. It is the 50th day after Easter (and the 10th day after Ascension Thursday). It is Historically and symbolically related to the Jewish harvest festival of Shavuot. It is to remember the coming of the Holy Spirit to the Apostles and other followers of Jesus as described in the book of Acts in the Bible, as Jesus had promised after he rose from the dead. About 3,000 people were baptized that day, which to many, makes it the real start of the Christian Church.

All content from Kiddle encyclopedia articles (including the article images and facts) can be freely used under Attribution-ShareAlike license, unless stated otherwise. Cite this article:
Pentecost Facts for Kids. Kiddle Encyclopedia.