Acts of the Apostles facts for kids 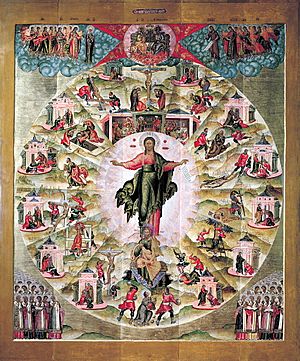 Jesus surrounded by his Apostles

The Acts of the Apostles (Greek Praxeis Apostolon) is a book of the Bible, which now is the fifth in the New Testament. It is often simply called Acts.

Acts tells the story of the Early Christian church, with particular interest for the ministry of the Twelve Apostles and of Paul of Tarsus. The early chapters in Jerusalem, report Jesus's Resurrection, his Ascension, the Day of Pentecost, and the start of the Twelve Apostles' ministry. The later chapters report Paul's conversion, his ministry, and finally his arrest and imprisonment and trip to Rome.

Most people think that the author of Acts also wrote the Gospel of Luke, as Acts 1:1 refers to 'the former treatise have I made, Theophilus, of all that Jesus began both to do and teach'. The traditional view is that both the two books were written c. 60 by a companion of Paul named Luke. Many theologians still think so. But some think the books were written by an unknown author at a later date, sometime between 80 and 150.

All content from Kiddle encyclopedia articles (including the article images and facts) can be freely used under Attribution-ShareAlike license, unless stated otherwise. Cite this article:
Acts of the Apostles Facts for Kids. Kiddle Encyclopedia.