Gospel of Luke facts for kids 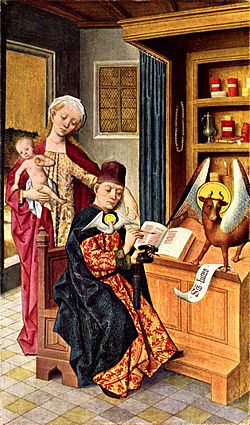 A picture of St Luke by Hermen Rode

Luke was a doctor. He wrote his gospel for a man he calls 'most excellent Theophilus' (1:3). Luke wrote another book which is fifth in the New Testament, the Acts of the Apostles which tells what Jesus' disciples did after his rise back to Heaven.

Unlike the gospel writers Matthew, Mark and John, Luke was probably not Jewish but was Greek. He wrote the gospel mainly for non-Jewish people, (who were called Gentile by the Jews). Luke wrote to prove that Jesus is the Son of God. Luke's gospel contains many similar stories of Jesus. He tells more about the Virgin birth of Jesus than the other gospel writers.

All content from Kiddle encyclopedia articles (including the article images and facts) can be freely used under Attribution-ShareAlike license, unless stated otherwise. Cite this article:
Gospel of Luke Facts for Kids. Kiddle Encyclopedia.