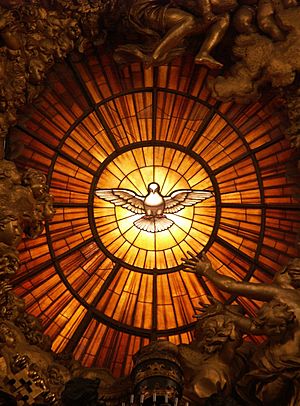 Depiction of the Holy Spirit as a dove, by Gian Lorenzo Bernini, in the apse of Saint Peter's Basilica.

The Holy Spirit, or Holy Ghost, is a part of the triune godhead (three in one God) of Christianity.

According to the Bible

It was by the Holy Spirit that Jesus was conceived in Mary (Matthew 1:18,19).

When Jesus had finished his ministry on Earth, he told his followers that he would provide "another Comforter" (helper), who would lead them, into truth (John 14:16), and would be their teacher to tell them things that Jesus had not told them, but that they needed to know to continue to live for God.

The second chapter of the book of Acts tells how on the 50th day after Passover (called Pentecost), and 10 days after Jesus ascended to Heaven, Jesus' followers were gathered at the feast. While they were praying, the Holy Spirit came upon them. They began to speak in other languages (tongues).

While most Christians believe that the Holy Spirit is in them from the time they become born again, in Pentecostal denominations, such as the Assemblies of God, it is believed that speaking in unknown languages can still be an expression of the Holy Spirit, and that it is proof that a person has received the baptism of the Holy Spirit.

All content from Kiddle encyclopedia articles (including the article images and facts) can be freely used under Attribution-ShareAlike license, unless stated otherwise. Cite this article:
Holy Spirit Facts for Kids. Kiddle Encyclopedia.