Miracles of Jesus facts for kids 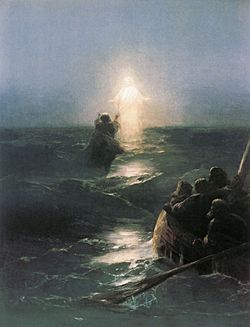 The Gospels of Matthew, Mark and Luke record many of these stories. The most common are healing people who are sick, blind, lame or deaf. In may cases the sicknesses or other problems are said to be caused by demons. Jesus said that he had power over the demons and so He could stop their evil work. Some of the enemies of Jesus told him to do miracles to show that He had supernatural power, but He refused. However, for his followers he did several miracles that showed His power. These included stopping a storm in the sea, walking on water and making a tree wither. In Islam, Jesus is said to have spoken from his cradle, made a clay bird come alive, and brought down from heaven a table full of food. Both the Koran and the Christian New Testament say that Jesus brought some dead people back to life.

All content from Kiddle encyclopedia articles (including the article images and facts) can be freely used under Attribution-ShareAlike license, unless stated otherwise. Cite this article:
Miracles of Jesus Facts for Kids. Kiddle Encyclopedia.