Sermon on the Mount facts for kids 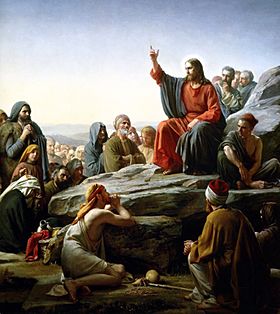 The Sermon on the Mount (anglicized from the Matthean Vulgate Latin section title: Sermo in monte) is a collection of sayings and teachings of Jesus Christ, which emphasizes his moral teaching found in the Gospel of Matthew (chapters 5, 6, and 7). It is the first of the Five Discourses of Matthew and takes place relatively early in the Ministry of Jesus after he has been baptized by John the Baptist, finished his fasting and meditation retreat in the desert, and begun to preach in Galilee. The name and location of the mountain is unstated; the Mount of Beatitudes is the traditional interpretation.

The Sermon is the longest continuous discourse of Jesus found in the New Testament, and has been one of the most widely quoted elements of the Canonical Gospels. It includes some of the best known teachings of Jesus, such as the Beatitudes, and the widely recited Lord's Prayer. The Sermon on the Mount is generally considered to contain the central tenets of Christian discipleship.

The Sermon on the Mount occupies chapters 5, 6 and 7 of the Gospel of Matthew. The Sermon has been one of the most widely quoted elements of the Canonical Gospels.

This is the first of the Five Discourses of Matthew, the other four being Matthew 10, Matthew 13 (1–53), Matthew 18 and the Olivet discourse in Matthew 24.

The Sermon is set early in the Ministry of Jesus, after he has been baptized by John the Baptist in chapter 3 of Matthew's Gospel, gathered his first disciples in chapter 4, and had returned from a long fast and contemplation in the Judaean Desert where he had been tempted by Satan to renounce his spiritual mission and gain worldly riches.

Before this episode, Jesus had been "all about Galilee" preaching, as in Matthew 4:23, and "great crowds followed him" from all around the area. The setting for the sermon is given in Matthew 5:1-2. Jesus sees the multitudes, goes up into the mountain, is followed by his disciples, and begins to preach. The Sermon is brought to its close by Matthew 8:1, which reports that Jesus "came down from the mountain followed by great multitudes".

All content from Kiddle encyclopedia articles (including the article images and facts) can be freely used under Attribution-ShareAlike license, unless stated otherwise. Cite this article:
Sermon on the Mount Facts for Kids. Kiddle Encyclopedia.