Kids Encyclopedia Facts
This page is about the Feast of the Ascension. For the event that it celebrates, see Ascension of Jesus.

Ascension is a Christian holiday. The word "ascension" means "going up". According to the story told in the Bible, Jesus ascended (went up) to heaven. This was seen by his apostles. The holiday is celebrated forty days after his resurrection. The story tells that Jesus' body went to heaven, and that in heaven he sits at the right-hand side of God the Father.

Ascension Day is officially celebrated on a Thursday. However, not all countries hold the feast on this day. It is one of the ecumenical feasts. All Christians celebrate this feast, much like Easter and Pentecost. It is a very important feast in the calendar of the Christian Church.

In some countries (at least in Austria, Belgium, Colombia, Denmark, Finland, France, Germany (since the 1930s), Haiti, Iceland, Indonesia, Liechtenstein, Luxembourg, Madagascar, Namibia, The Netherlands, Norway, Sweden, Switzerland and Vanuatu) it is a public holiday; Germany also holds its Father's day on the same date. 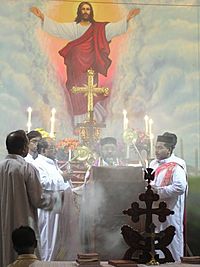 The Eastern Orthodox Church calculates the date of Easter differently, so the Eastern Orthodox celebration of Ascension will usually be after the western observance (either one week, or four weeks, or five weeks later; but occasionally on the same day). The earliest possible date for the feast is May 13 (of the western calendar), and the latest possible date is June 16. Some of the Oriental Orthodox Churches, however, observe Ascension on the same date as the Western Churches.

The feast is observed with an all-night vigil.

Texts in the Bible

The Epistle to the Romans is a book from the Bible which was written about the year 56 or 57. In it, Paul describes Christ as in heaven and in the abyss. This seems to be the earliest Christian reference to Jesus in heaven.

One of the most important texts about the Ascension is in the Acts of the Apostles 1:1-11. According to the two-source hypothesis it is also the earliest. There Jesus is taken up bodily into heaven forty days after his resurrection. The text says that the apostles saw this happening. Before going into heaven, Jesus gave a speech called the Great Commission, in which he said that he would return. In the Gospel of Luke, the Ascension takes place on Easter Sunday evening. The Gospel of John (c. 90-100) talks about Jesus returning to the Father. In 1 Peter (c. 90-110), Jesus has ascended to heaven and is at God's right side. Ephesians (c. 90-100) refers to Jesus ascending higher than all the heavens. First Timothy (c. 90-140) describes Jesus as taken up in glory. The traditional ending in the Book of Mark (see Mark 16) includes a short version of what Luke had said about the resurrection. It describes Jesus as being taken up into heaven and sitting at God's right hand. The way that Christ's Ascension is described is similar to the general description of his welcome in heaven, a description that comes from Hebrew scripture. The picture of Jesus rising bodily into the heavens fits in with the old traditional idea that heaven was above the earth.

Other texts about the ascension

There are texts that are not in the Bible that also speak about ascension, for example Pistis Sophia. In his text Against Heresies, Irenaeus tells about the Gnostic view that the Ascension happened eighteen months after the Resurrection. The apocryphal text known as the Apocryphon of James describes the teachings of Jesus to James and Peter 550 days after the resurrection, but before the ascension. This text suggests an even longer period. The recently discovered Nag Hammadi Gospel of Thomas, like the canonical Gospel of Matthew, does not mention the Ascension. 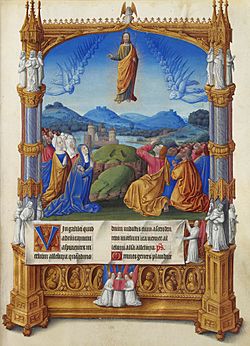 The feast of the Ascension has been celebrated for many centuries. Although we do not have anything in writing about it before the beginning of the fifth century, St. Augustine says that it is of Apostolic origin, and he speaks of it in a way that shows that all Christians celebrated it long before his time (he lived from 354-430).

Christ's ascension is mentioned in the original Nicene Creed. This text has been important to Christians ever since it was made in 325. It is included in the Mass. It is also mentioned in the Apostles' Creed. It is important for Christian belief because it shows that Jesus' humanity was taken into Heaven. Ascension Day is one of the chief feasts of the Christian year. There is plenty of evidence that shows that the feast dates back at least to the later 300s.

The canonical story of Jesus ascending bodily into the clouds is different from the gnostic tradition, by which Jesus was said to transcend the bodily world and return to his home in the spirit world. It also contrasts with Docetic beliefs, by which matter is basically evil and Jesus was said to have been pure spirit.

Scholars of the historical Jesus think that New Testament accounts of Jesus' resurrection were stories that were invented by the apostolic-era Christian community. Some describe the Ascension as a convenient way to disagree with ongoing appearance claims in the Christian community.

All content from Kiddle encyclopedia articles (including the article images and facts) can be freely used under Attribution-ShareAlike license, unless stated otherwise. Cite this article:
Ascension Facts for Kids. Kiddle Encyclopedia.