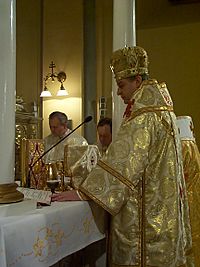 A bishop celebrating the Divine Liturgy in an Eastern Catholic Church in Prešov, Slovakia.

A liturgy is a ceremony, according to the traditions of a particular group or event. In religion, it may mean an elaborate formal ritual (such as the Catholic Mass), or a daily activity such as the Muslim Salats. Anglican, Orthodox, Lutheran, or other groups, when using the words "the Liturgy", normally mean a standardized order of events observed during a religious service, often including the Eucharist. The open or waiting worship of Quakers is an example of a non-liturgical service because there is no minister or structured order of events.

In the Christian church, liturgical churches are those that use a well-defined liturgy dating to the second century and earlier, in which many of the words and music used follow basic patterns each time the service is conducted. Most Orthodox, Catholic, Anglican, and Lutheran churches are liturgical, most other churches to a far lesser extent. So-called non-liturgical churches usually follow a common worship sequence from one service to the next, with several elements common to many such services. These elements often include readings from the Bible, hymns, a sermon, offerings of money, and at certain times, Holy Communion.

All content from Kiddle encyclopedia articles (including the article images and facts) can be freely used under Attribution-ShareAlike license, unless stated otherwise. Cite this article:
Liturgy Facts for Kids. Kiddle Encyclopedia.