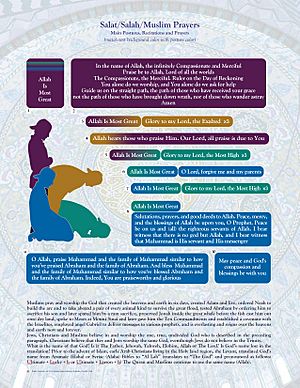 The four main salat postures and associated prayers and recitations.

Ṣalāt is the practice of prayer in Islam. It is one of the five most important duties for Muslims. To perform Salat, a person's mind must be in a state of ritual purity, which comes from ritual ablution, (wuḍūʾ).

For Sunni Muslims, salat must be performed at five periods each day. These periods are measured according to the movement of the Sun. The call to prayer is essential before every obligatory prayers. The holy prophet said: "The one who responds to Azan out of faith and seeking Allah's pleasure will be admitted to paradise."

All content from Kiddle encyclopedia articles (including the article images and facts) can be freely used under Attribution-ShareAlike license, unless stated otherwise. Cite this article:
Salat Facts for Kids. Kiddle Encyclopedia.