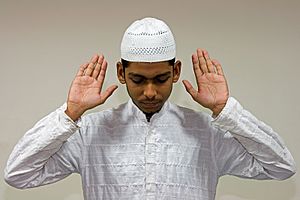 A Muslim raises both of his hands to recite the Takbīr in prayer.

Allahu Akbar is a Muslim saying. It is often used in situations ranging from a greeting to an expression of strong sentiments. It is most correctly translated as "God is greater", but in many instances "God is great" is an equally correct translation. "Allahu Akbar" is the first part of the Adhan, which is heard 5 times daily in Muslim communities. The saying is a very strong expression that summarizes the entire core of Islam.

This Arabic phrase was added to the Iraqi flag, in Saddam Hussein's handwriting, in 2001. Muslims say it before changing positions during their prayers.

All content from Kiddle encyclopedia articles (including the article images and facts) can be freely used under Attribution-ShareAlike license, unless stated otherwise. Cite this article:
Takbir Facts for Kids. Kiddle Encyclopedia.