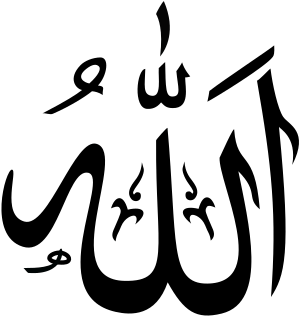 The word Allah is the Arabic term for God. It usually refers to the Islamic God, but in the Middle East, other religions sometimes use the same term for their God.

In Islam, Allah is the main word for "God." Muslims use 99 Names of God to describe God, but "Allah" is the most common of these and means all of them. When a Muslim says "Allah," all of the other names of God are thought of as part of it. Muslims also believe that this word tells about God's being a single entity and as being without wrong or defect and of God having no partner.

"Allah" is often used by Muslims when they are praying. Muslims have a faith in one God. They believe that God is the one who made everything, the one judge, and the only one who has power over all things. They also believe that Allah created the heavens and the Earth just by saying "Kun" which means "Be".

All content from Kiddle encyclopedia articles (including the article images and facts) can be freely used under Attribution-ShareAlike license, unless stated otherwise. Cite this article:
Allah Facts for Kids. Kiddle Encyclopedia.